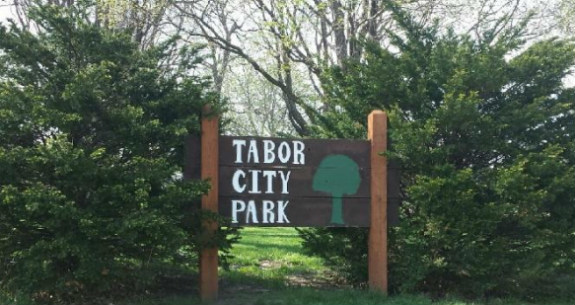 Photo by City of Tabor

The town was officially established in 1858, but was first settled in 1852 by George B. Gaston, a Congregationalist missionary, and Reverend John Todd, a graduate of Oberlin Theological Seminary in Ohio.  Gaston and Todd sought to create a frontier colony in the image of Oberlin Seminary.  They were both adamantly opposed to slavery.

Gaston was instrumental in propagating antislavery practices in western Iowa.  Referred to as the town’s founder for his activities in creating a settlement in the early 1850s, Gaston was first drawn to Iowa because of a missionary trip to the western prairie.  Gaston and his wife Maria Cummings worked among the Pawnee Indians in Nebraska from 1837 to 1842.  They were both quite changed by the people they met.  Forced to return to Oberlin due to health issues, Gaston had a difficult time forgetting the experiences he had.  He strongly believed that a new settlement in the western prairies could extend the good work of Oberlin in the frontier, establishing a community firmly rooted in the values of religion and education.  Gaston, after much debate, convinced a young Todd to join in the “frontier colony adventure.”  Todd later proved to be crucial in establishing the Underground Railroad in Iowa and helped make the town known, as declared by George Gill, an associate of John Brown, as "the staging point for the free-state movement in Western Iowa."

Central to the activities of Gaston and Rev. Todd were two prominent properties that are included in the Tabor Antislavery Historic District: the Public Square (known today as Tabor City Park) and the Reverend John Todd House.  The Public Square (Tabor City Park), ten acres of land once owned by Gaston and given to Tabor upon the town’s official establishment, was as an important community gathering space, serving as an anchor for both the first buildings in the town and for the spread of antislavery convictions.  Townspeople met in the square to discuss and reinforce their controversial, yet strongly held beliefs in opposition to the “flagrant sin” of slavery.  As a result, they developed strong networks of resistance to slavery and assistance to fugitive slaves.  The square was also used for camping and drilling exercises executed by local militiamen and by abolitionist John Brown before his raid on Harper’s Ferry.  The square reflects Gaston’s educational and religious vision of the community in the significant location the Public Square occupies in Gaston’s original town layout from 1854.  One important building still standing today facing the Public Square is Rev. Todd’s House.