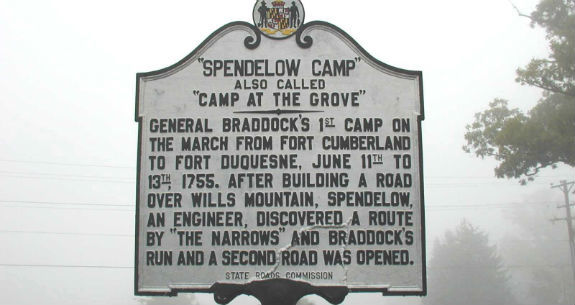 Also Called "Camp at the Grove"

In the summer of 1755, the army of General Edward Braddock constructed a road across Haystack Mountain on its march from Fort Cumberland to Fort Duquesne. The first campsite of the June 11 - 13 expedition, on the western side of Haystack Mountain, was called Spendelow's Camp. The camp got its name from Lt. Spendelow, who was an engineer in the advance party. It was Lt. Spendelow who discovered a route through "The Narrows".

The area of Spendelow's camp has been transversed with roads, including Route 48. The State Highway Administration's District 6 facilities and a wooded area to the west of the sign are surrounded by a cyclone fence. No physical sign of the camp remains.