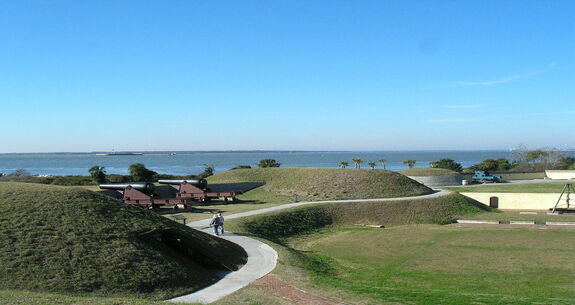 General Benjamin Lincoln takes command of the southern theater after the fall of Savannah. General Henry Clinton sends General Charles Cornwallis to conduct an all-out siege against Charleston, South Carolina in the spring of 1780.

A series of engagements leads to the surrender of the city and the capture of more than 5000 Continental soldiers and militia, the largest loss for the Americans during the war. The loss wipes out the Continental southern command.

Fort Moultrie served as a defensive system for the South Carolina coastline beginning in the mid-1770s. The fort played an important role in Charleston’s defenses during the first British attempt to occupy the city in June of 1776. Fort Moultrie was then captured by the British during their siege of Charleston in 1780. Fort Moultrie, now part of Fort Sumter and Fort Moultrie National Historical Park, has been restored to portray the major periods of its history, including during the American Revolution.

The Fort Moultrie Visitor Center includes an orientation film and exhibits that trace the story of American seacoast defenses from 1776-1947. You can walk the grounds of Fort Moultrie and learn about its history from interpretive panels. Guided tours are also available on certain days.

Check the Fort Sumter and Fort Moultrie National Historical Park web site for information on hours of operation and availability of guided tours.

Photo: Own work by DiscoverWithDima via Wikimedia Commons, licensed under CC BY-SA 4.0.