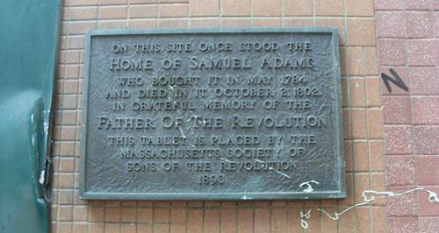 On this site once stood the home of Samuel Adams who bought it in May 1784 and died in it October 2, 1802. In grateful memory of the Father of the Revolution, this table is placed by the Massachusetts Society of Sons of the Revolution 1893

The patriot and propagandist Samuel Adams (1722-2803) lived in a house on this site from 1784 until his death. A cousin of John Adams, Samuel Adams wrote many criticisms of the British government, advocated separation from Great Britain, and was instrumental in the organization of the Boston Tea Party. Adams was a signer of the Declaration of Independence and served as governor of Massachusetts from 1794 to 1797. He was born on nearby Purchase Street.