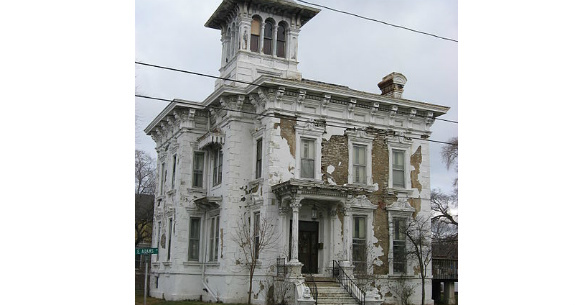 The leaders in Sandusky’s Underground Railroad movement were freeborn black Sanduskians. In fact, communities of free blacks across the United States were the most powerful force in aiding those escaping from slavery. According to Rush Sloane, who recorded more than thirty Underground Railroad stories after the Civil War, “before the year 1837, the fugitives who escaped through Sandusky were conducted and aided almost wholly by black men,” including at least 22 free men in Sandusky’s Black community.

The impressive white house on the corner belonged to Rush Sloane, a Sandusky attorney, abolitionist, and later on, Mayor of Sandusky.

In 1852, Black families escaping slavery stood on a Sandusky dock attempting to board the steamship Arrow. Kentucky slave owners dragged the families back to shore claiming them as runaway slaves.

They were hauled to the Mayor’s office to establish title. Rush Sloane was called to the Mayor’s office where a growing crowd of armed Sanduskians on both sides gathered. Sloane recounted, “I asked…”are there any papers or writs to show why they are held?” There was no reply. I then said:”I see no authority for detaining these persons.” And at this, John B. Lott, a Black man cried out in an excited voice, “Hustle them out.” With guns and knives in the hands of many people on both sides of the issue in the Mayor’s office, the crowd obeyed John B. Lott. The crowd hustled out the former slaves and they went on to freedom in Canada.

Sloane was taken to court in 1854 and was the defendant in this case involving runaways from slavery. He was found guilty in a federal court under the 1850 Fugitive Slave Act of helping families escape slavery and fined over $3,000. Friends and sympathizers made contributions to help him pay this astronomical fine.