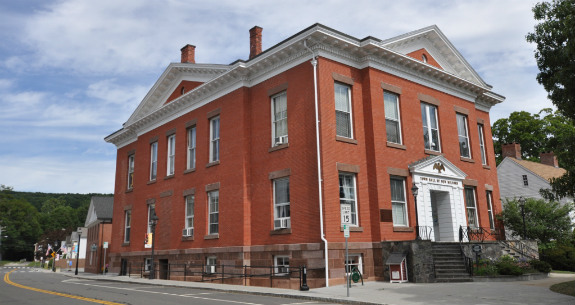 According to the Local Historic District and Property Commissions in Connecticut:

The Town Hall is the only red brick structure on the east side of the Green, but relates harmoniously to the otherwise clapboard and gable-roofed houses to either side with its Colonial Revival style. Its larger scale causes the building to stand out although not incongruously from its surroundings. The building is a two story brick building with high windows and wood trim. The original high-style Victorian portico was replaced in 1960 by the present neo-Georgian entrance. The original side entrance was removed. Roger Sherman's well is nestled between the curving front steps. An addition. the annex, was added to the building in 1965 to house the Police Station. This was renovated in 1989/90 when the Police Department relocated to a newly constructed building elsewhere in the Town. The interior of the main building has received cosmetic work through the years, and still retains many originally doors, windows, paneling and hardware features."

Significance of the property:

This is the mid 18th Century site of Hon. Roger Sherman's property, on which he ran a store. Architecturally, the building is a very early example of Colonial Revival architecture. It is simple but spacious inside, with high ceilings and large windows. The original plan of the ground and the second floors has been retained with few alterations to ceilings, walls or floors.