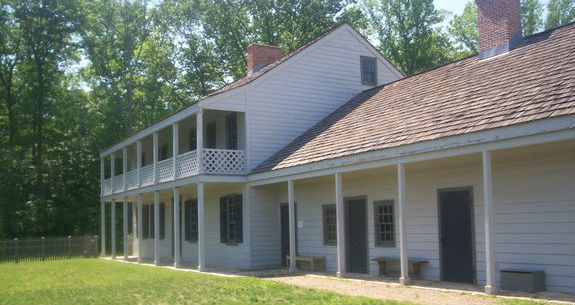 Rockingham is believed to be the second oldest house in the Millstone River Valley, its original rooms built about 1710. The house was originally a two-story, two-room frame house with a one and one-half story lean-to at its back, situated high on a rocky hillside above the river. The house and about 100 acres were purchased by 1735 by John Berrien, who later served as Somerset County Judge, Trustee for the College of New Jersey (present day Princeton University), New Jersey Supreme Court Justice and Colony Assemblyman. He greatly enlarged the house for his growing family in the 1760s and added land gradually to total over 360 acres, making it a substantial farm appropriate for a prosperous, well-established man.

In June of 1783, a small number of Pennsylvania troops of the Continental Army, not having received their back pay for almost a year, went into revolt and marched upon Philadelphia. Congress removed themselves to Princeton, New Jersey, after being assured of New Jersey's protection. Elias Boudinot, President of the Continental Congress, called upon General George Washington to send a loyal detachment of troops to Philadelphia which Washington did. In late July, Congress requested the General's presence in Princeton. Washington was in Newburgh, New York, near West Point with the remains of the standing army. Until he received the message and was able to reply, it was August. When accommodations were sought for Washington and his retinue at that time, there was little still available for a short-term stay. The only suitable home sat four miles away and belonged to the widow of John Berrien. Mrs. Margaret Berrien (who was living in a townhome in Princeton and had Rockingham up for sale) agreed to rent Rockingham and furnishings to the General and his entourage on a monthly basis. On August 23rd of 1783, General Washington, accompanied by his wife, three aides-de-camp, a small guard of two to three dozen soldiers including dragoons (the equivalent of military police today), and "domestics" (servants and slaves), took up residence.

The General would ultimately stay there over two and one-half months from late August to early November. It must have been a pleasant stay with Rockingham's varied orchards and spacious grounds, although Mrs. Washington was ill at times and, due to winter approaching, returned to Mount Vernon in early October. Washington entertained frequently including Congressmen such as James Madison and Elias Boudinot, military personnel such as General Benjamin Lincoln, Revolutionaries Robert Morris ("Financier of the Revolution") and Thomas Paine, and local acquaintances such as Annis Stockton (widow of Declaration of Independence signer, Richard Stockton) and the Van Hornes. He hosted at least one party with nearly two-hundred guests in early September. He, as well as Martha, also sat for two portraits at Rockingham.

Sometime in mid to late October 1783, Washington wrote his Farewell Orders to the Armies of the United States, giving thanks and praise to his troops and announcing his retirement from military service. He then sent this document out on October 30 to be read to the army at West Point on November 2 and published in Philadelphia newspapers thereafter. On October 31st, Washington and Congress received word that the Treaty of Paris had been signed, effectively ending the Revolutionary War. On November 10th, Washington left the farmstead and returned to New York to oversee the disbandment of the army and to eventually re-enter New York City after the evacuation of British troops in early December. After that, his final journey home to Mount Vernon included the formal resignation of his commission to Congress in Annapolis (where they had gone for the winter in early November) and concluded with what he believed would be his final retirement to private life.

Sometime after Washington's occupancy, Mrs. Berrien moved back into her home. No buyer appeared until 1802 when she finally sold the farm to Frederick Cruser. Rockingham stayed within the Cruser family until its sale in 1841. The buyer, Henry Duryee sold the property to James Stryker Van Pelt in 1847. Van Pelt farmed the land until 1869 when he sold it to David H. Mount, who probably never took up residence. Three years later, Mount sold several parcels of land to Martin A. Howell, including the Rockingham house. Howell began to quarry the hill that Rockingham sat upon. The house was used for managers at first. In 1896, the quarry turned the mansion into housing for Italian quarrymen and their families, with several families living in each room.

At this point, the decline of the old house came to the attention of Kate McFarlane of Rocky Hill; she became determined to save it and enlisted the help of Mrs. Josephine Thomson Swann of Princeton who provided the money to buy the house. Other local residents joined in with great enthusiasm forming the Washington Headquarters Association of Rocky Hill, which purchased the house from the quarry in 1896 for $1200.00. The house was then moved 300 yards to the east, a bit farther up the hill away from the advancing quarry operations, to land purchased from the quarry for $1.00.

By 1935, the original site was still in existence and the Association sought to buy back the land to move the house back, but the quarry would not sell. With greatly decreasing membership and low funds especially due to the Depression, the property was deeded to the State of New Jersey.

By 1957, Rockingham was once again moved away from the encroaching quarry and the damage of the accompanying blasts.

The 21st Century and Final Move

The mansion was restored and reopened to the public in 2004. Today Rockingham continues to be operated by the State of New Jersey, Division of Parks & Forestry, greatly aided by the site's official friends group, The Rockingham Association (est. 1964). Once again, expansion of the quarry led to Rockingham's third and final move in July, 2001, to a much larger site along the Delaware and Raritan Canal, closer to its original location.

Thousands of people from all fifty states and abroad visit every year and attend the varied programs offered at the site. Rockingham is listed on both the New Jersey and National Registers of Historic Places.