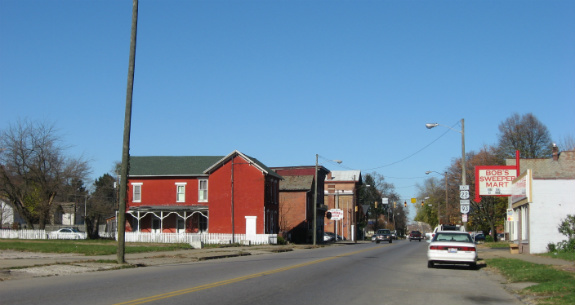 Putnam is one of the oldest settlements in the state of Ohio, established around 1800, and annexed into the adjacent city of Zanesville in 1872. The town's residents and institutions played an important role in the Underground Railroad and in Ohio's debate about the abolition of slavery. Putnam was home to prominent abolitionists as well as the location of two conventions of the Ohio Abolition Society.

The Stone Academy (115 Jefferson Street) is one of the oldest buildings in Putnam, built in 1809, and was the site of two conventions of the Ohio Abolition Society in 1835 and 1839. Noted abolitionist speaker Theodore D. Weld was speaking at the Stone Academy in preparation for the first of these conventions when a mob of anti-abolition residents of neighboring Zanesville broke up the meeting. The Stone Academy was attacked again during the 1839 convention, and 200 anti-abolitionists intending to burn all of Putnam were met by 70 Putnam residents at the entrance to their community. Further violence was averted by the arrest of some of the instigators. The congregation of Putnam Presbyterian Church (467 Woodlawn Avenue) was actively involved in the abolitionist movement. William Beecher, brother of Harriet Beecher Stowe, served as the first pastor of the church after it was constructed in 1835, and many other anti-slavery speakers spoke here including Frederick Douglas in 1852. A monthly prayer service for the abolition of slavery was held in the church's basement for many years, a service that was initiated at the Stone Academy in 1833.

George Guthrie's Greek Revival home (521 Woodlawn Avenue) was built in 1841 and was a known station on the Underground Railroad, where Guthrie harbored runaways on more than one occasion. His wife wrote in her unpublished autobiography: "I well remember hiding three children in our attic over one Sabbath while their owners were riding through the streets in pursuit." His brother, A.A. Guthrie, was the corresponding secretary for the Ohio Anti-Slavery Convention in 1835, and his house (405 Woodlawn Avenue) became the location of planning meetings for the Ohio Anti-Slavery Convention after the mob stormed the Stone Academy during Weld's speech. Along with their brother Stephen, the Guthrie brothers were involved with hiding a woman and her four children in the home of a black man named William Harris behind the Putnam Presbyterian Church and sending the slave hunters to look in a nearby abandoned mine while the runaways were transported to a safer hiding place. Major Horace Nye and his wife Lucinda Belknap Nye were active abolitionists; Major Nye presided over the 1839 state convention, and Lucinda was the President of the Muskingum County Anti-Slavery Society. Their house is located at 228 Adams Street.