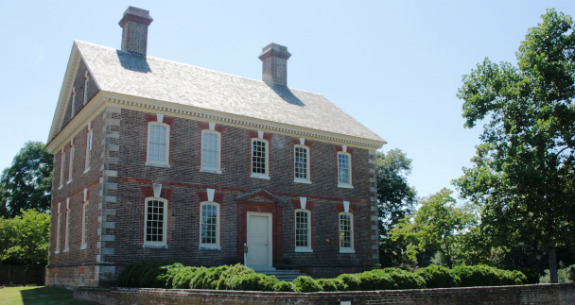 The Nelson House was the home of Thomas Nelson, Jr. (1738-89), Yorktown's most famous son and one of the signers of the Declaration of Independence. Nelson's devotion to the patriot cause during the American Revolution contributed significantly to the creation of the United States.

Nelson's grandfather established the Nelson family in Yorktown, arriving from England in 1705. He soon became a prosperous and influential merchant. He constructed his home, the Nelson House, about 1730. His son, William, inherited the family business and went on to accumulate extensive land holdings throughout the colony. William also became a powerful politician, seving as both president of the Governor's Council and as acting governor.

Thomas Nelson, Jr., inherited the family business on the death of his father, William. (Nelson was given the title "Junior" to distinguish himself from his uncle, who was also named Thomas). By the time of the revolution, Thomas Nelson, Jr. was one of the most powerful and influential men in Virginia. At various times during the war, he served in the Continental Congress, the state legislature and was governor of Virginia from June through October 1781. As a brigadier general, he also commanded the Virginia militia at the Siege of Yorktown. Nelson's sacrifices for the war effort and his exposure in the field contributed to his chronic ill health. He died during an asthma attack six years after the revolution. Nelson is buried in the graveyard of Grace Church in Yorktown.

Nelson's wife, Lucy, continued to live in the Nelson House for more than 30 years after her husband's death, and the house remained in the Nelson family until 1908. During the Civil War it served as a hospital for the Confederate and later for the Union forces. In 1914, Captain and Mrs. George P. Blow purchased the Nelson House and renovated it as the center of a large estate, known as "York Hall." The National Park Service acquired the house in 1968 and restored it to its colonial appearance.

The Nelson House is one of the finest examples of early Georgian architecture in Virginia. (The Georgian style took its name from the four British kings named George, who reigned from 1714 to 1830). Georgian architecture was popular in the 1700s because its simple, balanced appearance gave an impression of order and stability. Many of its features, such as the triangular pediment above the front door and the cornice, or decorative molding, under the eaves of the roof, can be traced to ancient Greece and Rome.

Most of the Nelson House is original, including the bricks and most of the mortar in the outer walls. Inside the house, the wall panels and most of the wooden floors are original, a notable exception being the floor in the downstairs hall. The paint on the walls matches the color of the first paint applied after the house was constructed. The furnishings in the house today include reproductions and a few period pieces, none of which belonged to the Nelsons.

Judging from the color of the house's bricks, it is possible that they were brought to Virginia from the Severn River Valley, in England, aboard Nelson's ships. Notice that the bricks above the windows, around the doors, and in some other locations on the house are a different, brighter color. These are called "rubbed" bricks, since the color was obtained by rubbing the bricks together to make them straighter. Such bricks were laid at corners, around openings, and along borders to achieve sharp, straight edges.

During the colonial period five or six small outbuildings of Georgian design were clustered in an area to the right of the Nelson House. The buildings were used at various times as kitchens, wash houses, poultry houses, dairy houses, smoke houses, spinning houses and servants' quarters. The outbuildings made the Nelson household virtually self-supporting.

Informal tours of this early 18th-century home's first floor are offered through the year as staffing permits. Call for hours of operation.