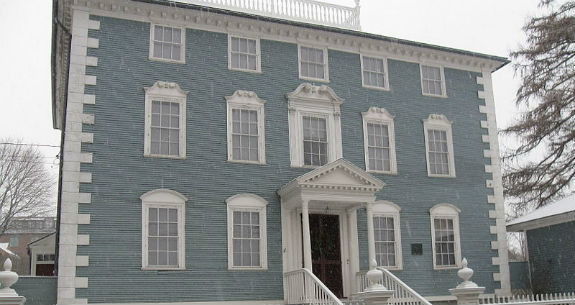 The Moffatt-Ladd House was built between 1760 and 1763 for the only son of John Moffatt, one of the wealthiest men in the colony of New Hampshire prior to the Revolution.  Samuel and Sarah Catherine Moffatt were the first to live in the house and they took up residence shortly after their wedding in February 1764.  They would be the beginning of almost 150 years of the same family living in the stately home on Fore Street, overlooking the Piscataqua River. . . . It is considered one of America's finest Georgian mansions.

Did you know: The 242-year-old Horse Chestnut tree next to the house was planted with a chestnut William Whipple picked up in Philadelphia at the Continental Congress. (Our thanks to Morrie Shepard Killian, for this interesting historical note.)