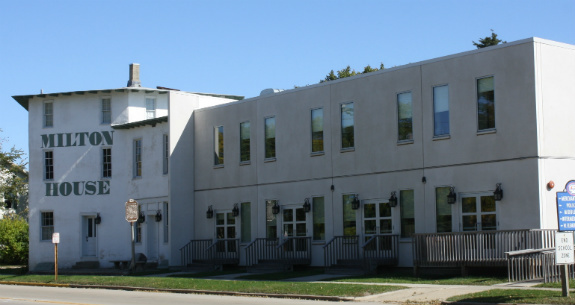 Photo by Royalbroil / CC BY

The Milton House was opened in 1844 as a stagecoach inn by Joseph Goodrich, the founder of Milton.  The Inn was built in the shape of a hexagon and is one of the oldest standing poured grout buildings.  In 1948 the Milton Historical Society formed to preserve Milton's history. This included the Milton House, which had major damage and was in need of restoration.  The Milton House opened as a museum in May of 1954.

One of the highlights of the museum today is the tunnel that was used to help fugitive slaves traveling the Underground Railroad escape to freedom.

"Milton's underground tunnel which is also unique in the nation for being the only segment of the Underground Railroad that was actually underground and has retained its identity and is open to the public. There are rumors of others but none of them are available for inspections (Dr. Rachel Salisbury, unpublished notes, 1972)."