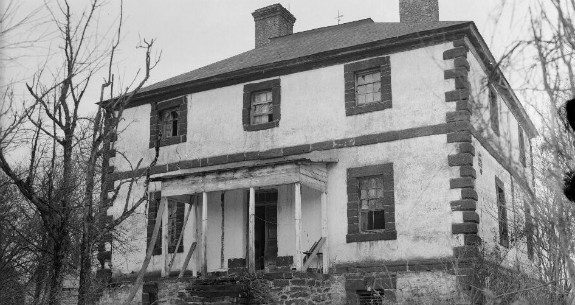 Menokin was the home of Francis Lightfoot Lee, a Signer of the Declaration of Independence, and his wife, Rebecca Tayloe Lee of Mount Airy Plantation. The house was built in 1769 on land once inhabited by the Rappahannock Tribe. In 1971 it was designated a National Historic Landmark for its significance as the home of a signer of the Declaration of Independence. The Menokin Foundation was formed to preserve, protect and interpret this important structure.

Menokin is one of the few 18th-century Virginia homes for which the original architectural drawings still exist. Although the designer’s identity is a mystery, the Georgian-style mansion clearly was influenced by the ideas of Italian architect Andrea Palladio. Similar to other mansions in Virginia and Edinburgh, Scotland, the house sheds light on early construction methods of 18th-century Tidewater Virginia homes.

Approximately 80 percent of Menokin’s original materials have survived. The main house was built with materials from the nearby area, such as sandstone used for the exterior and white oak and pine on the interior — making the house an integrated part of the landscape. Being a stone house made Menokin unusual among Virginia homes, which were usually made of brick during that period.

Despite its physical decline in the 20th century, Menokin grew in recognition as an important part of America’s history. The site was added to the Virginia Landmarks and the National Register of Historic Places in 1968 and 1969, respectively. In 1971, it was designated a National Historic Landmark — the most prestigious historic honor a U.S. building can achieve.

After an illustrious beginning, Menokin lay mostly unoccupied after 1960. In addition to suffering the ravages of time, the house was severely damaged by a tree falling through it in the late 1960s. By 1995, when the Menokin Foundation received it, the house was in ruins. A steel canopy has protected it since 2000, although the house is still exposed to the elements on all sides. The Foundation has begun implementing a bold plan for Menokin, and remains dedicated to making the house and collection available to scholars, preservationists, and enthusiasts for learning and inspiration.