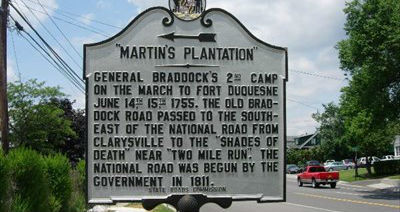 The Martin's Plantation was General Braddock's second camp on his march to Fort Duquesne. Braddock and his troops stayed at the site on June 14 and 15 at the year 1775. During the period or encampment, scouts moved westward. exploring the surrounding countryside. The site can only be approximated as there are no records of the exact location and boundaries. All that is known is that it was located to the southeast of the National Road.

A sign marks the location of Martin's plantation and is a reminder of the historic march of General Braddock to Fort Duquesne, which was one of the first military roads in Western Maryland.