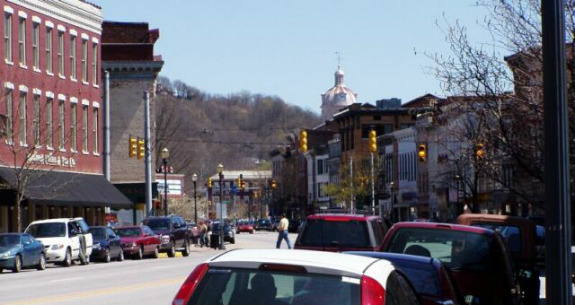 Photo by Chris Light / CC BY

The town of Madison was laid out on a grid in 1806. In the northern part of this section along Walnut Street is the neighborhood known as Georgetown, which once was home to prominent African-Americans in the community.

Madison as a whole and specifically the neighborhood of Georgetown possesses a high degree of integrity. Because of the unique facts of Madison’s history, many buildings dating earlier than 1850 are intact today; in Georgetown there are 223 structures; 105 of these are from the period of significance (1820-1850).

A comparative analysis of the national significance of Madison’s Georgetown neighborhood shows its uniqueness in a variety of ways: the intact African American neighborhood, the integrity of structures in a community associated with the Underground Railroad, and the authenticity of the combination of the two (an African American community associated with the Underground Railroad).

This African Methodist Episcopal Church in Madison was used by the African American population living in the part of town known as Georgetown. Many of the congregation members had strong ties to the Underground Railroad. Over the years, the church was converted into housing. In 2002, with a grant from the Division of Historic Preservation and Archaeology, Historic Madison, Inc. purchased the building. After restoration, the building will be used as a cultural center and museum to highlight the history of the Georgetown area.

William Anderson was born in Hanover County, Virginia to a free black woman, but was bound to a slaveholder as a child. He recalled he had been sold or exchanged hands eight or nine times. Despite his social status, he managed to learn to read and write, finally escaping slavery by writing his own pass. He arrived in Madison on July 15, 1836. When Anderson moved in the Georgetown District, he started working in the "Colored Methodist Episcopal Church" and built the first church on Walnut Street. This church group asked William to stop his Underground Railroad activities, which he does not want to do. He eventually moved to another church, "African Methodist Episcopal Church" (see above for information on this church). In 1857, Anderson wrote a narrative of his life, where he recalled his Underground Railroad activity. Anderson died in 1867 in Madison and is buried in Springdale Cemetery.

Anderson ran a blacksmith shop on the corner of Walnut and Third Streets in Madison. He arrived in Madison in 1837. He was known as an aggressive conductor who, because of his light skin, traveled fugitives to freedom in Canada via steamboats and trains, masquerading as a master traveling with his slaves. He claimed to have brought 800 to freedom while in Madison and 1000 during the time he was in nearby Lawrenceburg, Indiana. In 1857, Anderson was captured on an Ohio River steamboat and arrested by Louisville police officers. He was taken to jail in Kentucky; he was found guilt of violating the Kentucky Law “Enticing Slaves to Run Away.” Anderson was sentenced to an eight-year term in June of 1857. The day Anderson was to be released from Frankfort, Kentucky prison on March 4, 1861 he was found dead in his cell.

DeBaptiste settled in Madison in 1837 and immediately asserted his role as a powerful leader by contesting an 1831 Indiana law, which required a bond payment for a free black to settle in the state. DeBaptiste challenged this law and refused to make payment. He was at first found guilty and ordered to leave. He enlisted the legal help of abolitionist Judge Stephen Stevens, who would become a member of Indiana Supreme Court. With Stevens’ legal arguments, DeBaptiste’s removal from the state was ruled “defective expulsion.” During his time in Madison, he became the center for Underground Railroad activities in Madison. In 1841, a mob comprised of Kentucky residents came into Madison to break up the UGRR activity. De Baptist moved to Detroit because of this incident. He continued his work in Detroit until after the Civil War and the end of slavery.