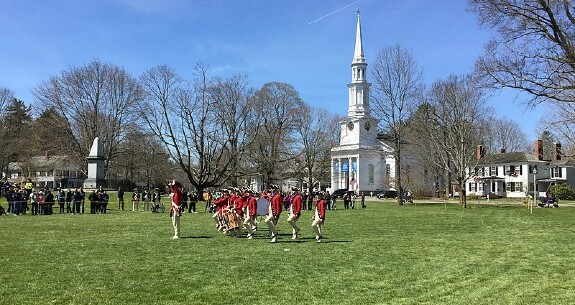 The British march out of Boston in search of cannons being stored by the Massachusetts militia. General Thomas Gage is under pressure to make a show of power in order to crush the spirit of rebelliousness in the colonies.

Paul Revere rides out to alert the militia. When the British column encounters a militia company on Lexington Green, a shot is fired – to this day, no one knows by whom. The British then fire, killing eight of the militiamen.

The British continue their march to Concord, where they destroy some minor armaments. Colonists attack a British unit left to guard the North Bridge. Having completed their work at Concord, the British begin their march back to Boston. They face nearly continuous attacks from a growing number of militia companies that have turned out to fight them.

By the time they reach Lexington, the column is exhausted and almost ready to surrender. Only the arrival of reinforcements allows the column to continue the march back to Boston. Their return marks the siege of Boston, which would keep the British trapped in the city for nearly a year.

You can visit the Lexington Battle Green, the site of the first battle of the American Revolution, year-round. The Green contains historical markers and monuments commemorating the battle. Costumed guides staff the Green during the spring, summer, and fall months.

The Lexington Historical Society interprets the events of April 19, 1775 at three historic sites:

Check the Lexington Historical Society website for information on hours of operation and fees.

Special Events: A re-enactment of the battle takes place on the Green on Patriots’ Day, the third Monday in April.

Interested in other re-enactments? See our Top 35 Historic Battle Reenactments This Year for more!

A guided tour of the Hancock-Clarke House where John Hancock and Samuel Adams were awakened by Paul Revere during the early morning hours of April 19. Just imagine their view from the second floor of the house of the British marching towards the Lexington Green!