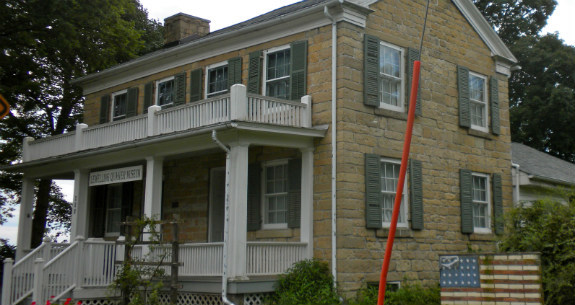 The Henderson Lewelling House is located in Salem, Iowa, the first Quaker community in Iowa, founded in 1835. Henderson Lewelling, a Quaker from Indiana, moved to Salem in 1837 with his brother and opened a general merchandise store and established a small commercial nursery. Like other Quaker Meetings across the country, the Salem Monthly Meeting experienced a schism within in its membership over the action the community should take in opposing slavery. The Society of Friends opposed slavery, but some members felt that they should not participate in helping fugitive slaves to freedom. Lewelling represented the more active side of this decisive question and in 1843, along with other members of the Salem Monthly Meeting, established the Abolition Friends Monthly Meeting. By 1845, Salem Meeting had disowned 50 of its members, an indication of how divided the Society of Friends was over participation in the Underground Railroad. Some of the Abolition Friends most probably met in the Lewelling House, built c.1840, to discuss their Underground Railroad activities, and the house may have also been a haven to fugitive slaves. Salem was only 25 miles from Missouri, a slave state, and many of its residents had strong anti-slavery beliefs, making the town an active stop on the Underground Railroad.

Lewelling is also known for promoting the fruit industry in Iowa and later in Oregon and California. He and his brother were the first people to plant fruit trees in Iowa. In 1837 they planted 35 varieties of apples, pears, cherries, peaches, plums, and small fruits. Ten years after arriving in Salem, Lewelling moved to Oregon and established a new nursery with 350 plants that had survived the long journey--the first grafted nursery stock planted on the Pacific Coast. Lewelling's brother later joined him and was responsible for propagating the Bing cherry. In 1853, taking advantage of the Gold Rush, Lewelling moved to California, established a nursery and founded the community of Fruitvale. Today, Lewelling is known as the Father of the Pacific Fruit Industry. His activities in Salem, Iowa, also make him an important figure in the Underground Railroad movement.