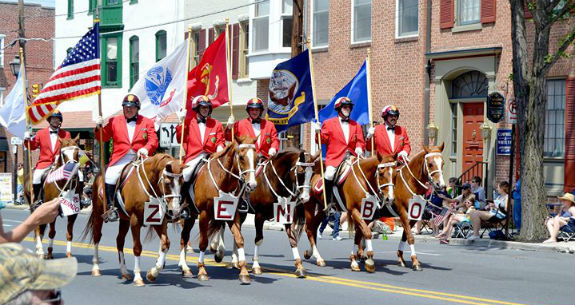 The Memorial Day Parade will begin at 2 p.m. at Lefever Street in Gettysburg and head northeast to Middle Street; turn west on East Middle Street and south on Baltimore Street to the Soldiers’ National Cemetery.

The Memorial Day Ceremony will take place at 3 p.m. at the Rostrum in the Soldiers’ National Cemetery.  This year's speaker will be Brigadier General Anthony J. Carrelli of the Pennsylvania National Guard. General Carrelli is responsible for the command, control and supervision of National Guard units – Army and Air – allocated to the Commonwealth of Pennsylvania, six state-owned veterans’ homes and programs for Pennsylvania’s one million veterans. General Carrelli graduated from the U.S. Air Force Academy with a Bachelor of Science Degree and was commissioned as a second lieutenant in 1985. He served in the active duty Air Force for several years as a T-37, AT-38, and A-10 pilot. Following his release from active duty, General Carrelli joined the Pennsylvania Air National Guard where he served as commander of both the 111 Fighter Wing and the 171 Air Refueling Wing, and Deputy Adjutant General – Air, before assuming duties as Adjutant General. General Carrelli has deployed in numerous operations to include Desert Storm, Southern Watch,