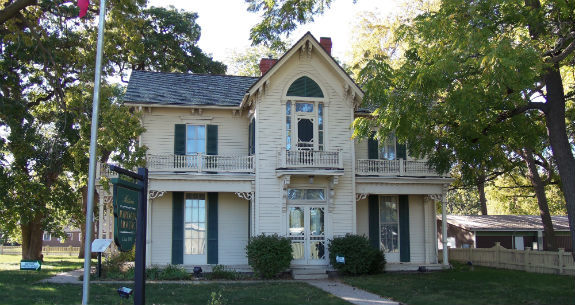 Photo  by Goddesshanna / CC BY

History of the Jordan House

James C. Jordan, a cattle farmer from Virginia and one of Iowa’s most influential early settlers built the Jordan House. When Jordan settled the area, he chose a beautiful location with ancient oak, walnut and hickory trees on land gently sloping to the Raccoon River. Jordan’s first shelter was a lean-to tent, which was replaced in 1848 with a log cabin. In 1850 he and his wife, Melinda, began work on the first phase of the Jordan House. The family, which at that time numbered six children, lived for a time in the basement of the structure, consisting of a small kitchen and a bed/sitting room. About a year later what turned out to be the first phase of the upper white frame two-story structure was completed, featuring a magnificent entrance, a center hall and two large rooms. A walnut staircase led to the upstairs and two spacious bedrooms. The kitchen remained in the basement.

During the antebellum period, the Jordan House was a designated stopover on the Underground Railroad. Freedom seeking slaves hid in the fields, barns and outbuildings on the property. Jordan, a staunch abolitionist, was regarded as the “chief conductor” for Polk County. Radical abolitionist John Brown stayed at least twice at Jordan House, once when he was leading a group of 12 slaves to freedom. The house also served as a haven for weary travelers on their westward journey. Jordan’s southern hospitality was apparent, as “Uncle Jimmy Jordan’s” house became known as a comfortable gathering place for local politicians and business leaders. After the death of his first wife, Jordan married Cynthia Adams and their and their family grew to eleven children. In 1870, the house was expanded again with the addition of another parlor, dining room, library and kitchen. Porches were built on both the east and south sides of the house. A second entrance was also added with a black walnut staircase leading to six more bedrooms upstairs.