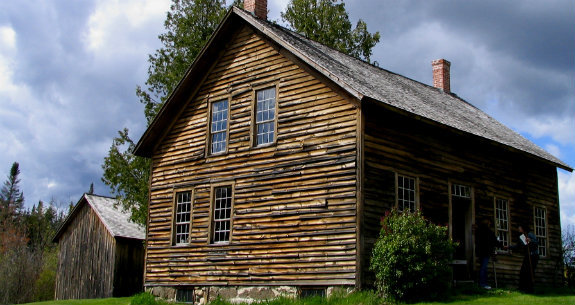 Photo by Mwanner / CC BY

High in New York State's Adirondack Mountains is the home and grave of abolitionist John Brown. Many Americans know the song "John Brown's body lies a-mouldering in the grave," but most do not associate the words with this simple farm at North Elba, New York.

On the night of October 16, 1859, Brown and his followers assaulted the U.S. Arsenal at Harper's Ferry, planning to use the captured arms in an extensive campaign for the liberation of the slaves in the South. Brown was captured on October 18, 1859, imprisoned at Charlestown, Virginia, tried by the Commonwealth of Virginia, and hanged on December 2, 1859. His body was returned to North Elba and was buried in front of his home on December 8, 1859. The remains of several of Brown's followers, who fought and died at Harper's Ferry, were moved to this small graveyard in 1899.

Brown's final prophesy--"I, John Brown, am quite certain that the crimes of this guilty land will never be purged away but with blood. I had, as I now think, vainly flattered myself that without very much bloodshed it might be done,"--was soon to be realized in the Civil War.