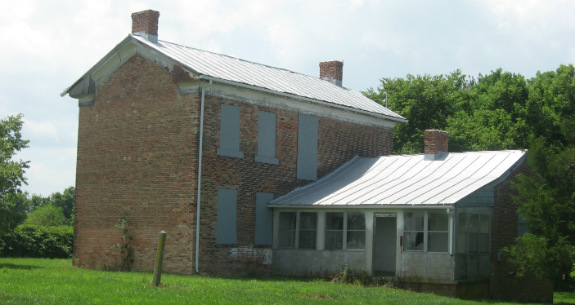 The James and Sophia Clemens Farmstead is one of the oldest and last remaining agricultural resources in one of Ohio’s earliest black settlements, Longtown (Greenville settlement). This farmstead was the home of James Clemens (1781-1870), who was the founding father of the settlement, instrumental in starting the first school, donated land for the Wesleyan Church and established a cemetery for the community. The Clemens were also conductors in the Underground Railroad and soldiers in the Civil War.

The records of the first landowners of Darke County, Ohio, show that James Clemens was the first free black man to purchase land in German township. Arriving with his wife Sophia in 1818 from Virginia, he soon built a thriving farm business. Sophia’s maiden name was Sellers, and she is believed to be the daughter of Adam Sellers of Rockingham County, Virginia the former slave owner of James Clemens. According to a map by William Siebert in his manuscript The Underground Railroad, Longtown (Greenville Settlement) was a stop in the Underground Railroad. In Siebert’s interview with Col. David Putman of Palestine August 13, 1898, Mr. Putman states, “At the Greenville Negro settlement was another station. The Clemens’ and the Alexander’s were the leaders in the movement there. These were Negro families.” The Clemens’ are listed as Darke County operators in Appendix E (Directory of the Names of Underground Railroad Operators) in Wilbert H. Sierbert’s The Underground Railroad from Slavery to Freedom.

Escaped slaves would stay in Longtown for a time, attending the Union Literary Institute before continuing their flight to Canada. The Union Literary Institute was a vocational school founded by residents of the settlement with anti-slavery Quakers in 1845. At least on one occasion, people searching for escaped slaves entered the settlement. Longtown was a strong abolitionist community, and when men of color were allowed to become soldiers during the Civil War, some young men from the region joined the Massachusetts 54th, the first colored regiment of the United States Colored Troops (USCT). James R. Clemens, grandson of James Clemens, served as a private in Company A of the 8"~United States Colored Troops infantry. According to W. E. B. Dubois, Longtown became a haven for interracial couples. Longtown is one of only two communities in Ohio to be considered tri-racial: persons of African-American, European and Native American ancestry lived here. The Clemens Farmstead, a two-story brick house, sits about 100 feet from Stingley Road, and the facade is a common bond brick pattern with classical Greek Revival details.

The James and Sophia Clemens Farmstead is located at 467 Stingley Rd., in the vicinity of Greenville, Ohio. It is private property and is not open to the public.