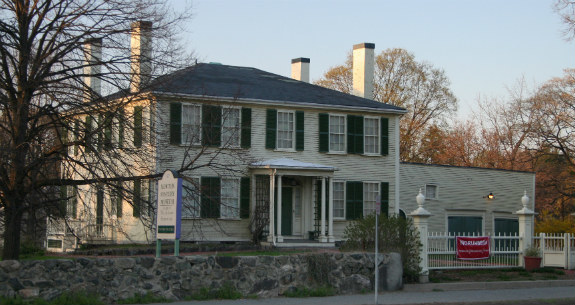 Photo by Thomas Kelley / CC BY

The Jackson Homestead was built by Timothy Jackson in 1809 in what became known as the Federal style of architecture. Hallmarks of this style include details referencing classical Greek and Roman buildings: side-lights and fan-lights flanking and above doorways, and rooms where textiles and wallpapers replace paneling.

Ellen Jackson, Timothy’s granddaughter, called the two-story home “a fine house for the times.” It is built from two wooden sides and two fashioned from brick.  The Homestead remained in the Jackson family until 1949, when its owner—a Jackson descendant, Frances Middendorf—gave the Homestead to the city of Newton.

Edward (1602–1681), the first Jackson who emigrated from England to America, settled in this area in the mid-seventeenth century.  Eventually, he became one of the largest landowners in Massachusetts and served as a deputy to the General Court, the colony’s legislature.

Edward’s son, Sebas, played a prominent role in Newton life, holding offices as varied as hogreeve, a man charged with rounding up stray pigs, to surveyor of highways.  Edward built a saltbox house—a dwelling constructed with two stories in the front and one in the back—on the site of the present Homestead.

Major Timothy Jackson (1756–1814) built the existing Jackson Homestead in 1809.  His son, William (1783–1855), became a prominent local politician, serving in the General Court and chairing Newton’s Board of Selectmen.  William and his second wife, Mary Bennett, had 12 children, yet William took the time—at personal, political, and financial risk—to become an abolitionist who offered his house as a way station on the Underground Railroad.