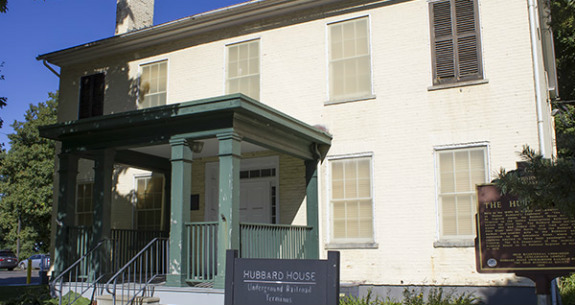 The William Hubbard family arrived in the Connecticut Western Reserve in the late spring of 1834.

William had been sent here from Trenton, Oneida County, New York to work as a land agent for his uncle Nehemiah Hubbard, Jr. He was one of the 39 men who formed the Connecticut Land Company following the 1795 re-division of the lands in the Ohio Territory.

He owned approximately 58,000 acres of land in this area. Because of his advanced years, he sent his brother Isaac’s sons out to establish a presence for him in the Western Reserve. Only weeks after arriving in Ashtabula, William became a member of the Ashtabula County Anti-Slavery Society. His brothers Matthew and Henry, who had arrived earlier and made homes for themselves in this part of the county, were already heavily involved in the Abolitionist movement, both having helped to found the Ashtabula Sentinel, an Abolitionist newspaper.

It may never be possible to know how many slaves William’s family helped on to Canada, as no written account has been located to date. However, it is known from an eyewitness account, that, at one time, there were thirty-nine slaves in hiding, as the gentleman stated, “thirty-nine slaves made short work of a barrel of pickles.” Other observers made note of the fact that fugitive slaves arrived day and night, looking for William and Katharine’s assistance and protection. William and Katharine purchased nearly fifty acres of land from Uncle Nehemiah in 1836. Since he thought of himself as a farmer first, and since the family was living only two blocks away at the Ohio Exchange Hotel that they were running for Nehemiah, William probably built the barn first to shelter his animals and farm equipment. This would allow him to get on with the business of farming.

The Hubbard House itself was built in late 1840 – early 1841. The bricks were made of clay dug from the banks of Lake Erie. Oral tradition tells that a fugitive slave known as “Uncle Jake” did much of the masonry work. In the late1870s, after passing out of the Hubbard family, the house had been “modernized” into an Eastlake style residence with larger windows and ornate trim work. It was owned by a variety of people and groups and used for everything from a women’s social club, to a temporary kindergarten, to the parks and recreation department building.

The house stood empty for many years, a victim of time and weather. In 1979 it was scheduled to feel the wrecking ball, but the house was rescued through the efforts of a small group of interested persons, one of whom was, most notably, William and Catharine’s great-great-grandson Thomas (Tim) Huntington Hubbard. An agreement was drawn up with the City of Ashtabula to receive the property on the condition that it be restored. The home has been returned to its 1840’s elegance. The house is furnished with period pieces and some unique Ashtabula County pieces.