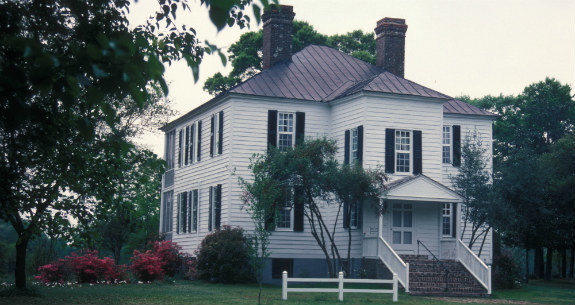 Hopsewee Plantation was originally part of the lands owned by Thomas Lynch, I (deceased 1738). He owned seven working plantations and most of the property along the North Santee River from Hopsewee to what is now the intracoastal waterway. Built by the Lynch family between 1733 and 1740, Hopsewee overlooks the beautiful Santee River; a site chosen to be the family home of Thomas Lynch, Sr. (1726-1776) from all the considerable Lynch properties.

Lynch was married to Elizabeth Allston, from the nearby Brookgreen Plantation, another prominent Georgetown family; they had two daughters: Sabina and Esther, born in 1747 and 1748, respectively, and a son, Thomas Lynch, Jr., in 1749. After Elizabeth Allston died around 1755, Mr. Lynch married Hannah Motte; and they gave brith to daughter Elizabeth in 1755.

Thomas Lynch, Sr., was a distinguished public servant and one of the most important Santee River planters. As a prominent Indigo planter, he was the first president of the Winyah Indigo Society, founded in 1755. In 1751, he was elected as the Prince George delegate to the Winyah Parish Commons House of Assembly, a post he held until his death, save one term. He served on the 1765 Stamp Act Congress, and in 1774 was elected to the First Continental Congress in Philadelphia. Lynch was highly esteemed by the founding fathers, and in October 1775, was appointed, along with Benjamin Franklin and Benjamin Harrison, as an advisor to General Washington.

However, in February 1776, he was paralyzed as a result of a cerebral hemorrhage while in Philadelphia. His son, Thomas Lynch, Jr., who was serving in the South Carolina militia, requested leave to join his ailing father but was denied; only later, when the South Carolina Second Provincial Congress made him First Continental Congress, he was able to join his ailing father in Philadelphia. Thus, the two Lynch delegates became the only father and son team to serve together. Thomas Lynch, Jr., was the 52nd signer of the Declaration of Independence at age 26, giving his Hopsewee Plantation birthplace its place in the pages of American history.

Although he remained a member of the South Carolina delegation, Thomas Lynch, Sr., was physically unable to sign the Declaration of Independence in the space left between the names of Edward Rutledge and Thomas Heyward, Jr. and died during his return home in December 1776 in Annapolis, MD, where he is buried.

Thomas Lynch, Jr., returned to South Carolina, retiring from public life due to a malingering fever contracted during his service with the South Carolina militia in 1775. He resided with his wife, Elizabeth Shubrick, with whom he had no children, at Peachtree Plantation on the South Santee River until 1779, when the couple sailed for France by way of the West Indies in hopes of improving his health; the ship and all its passangers were lost at sea.