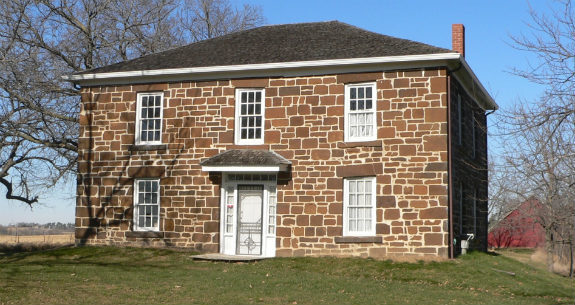 Photo by Ammodramus / CC BY

Hitchcock House was built in 1856 by Reverend George Hitchcock, a Congregational minister. The house is one of the few remaining Underground Railroad "Stations" in Iowa.

Fugitive slaves crossed from Missouri into Iowa along the Iowa border, but the fugitives who passed through Cass County came mostly from Kansas Territory. After the 1854 Kansas-Nebraska Act, many blacks seeking freedom entered Iowa at Nebraska City, Nebraska, and passed through Fremont and Mills counties. From Cass County the route went East to Des Moines, Grinnel, Iowa City and on to Illinois, generally crossing into Canada in the Detroit area.

According to local legend, John Brown preached at Hitchcock House. This is very likely since he made several trips to Kansas Territory and used the road that passes near Hitchcock House. Another local abolitionist was a second cousin to John Brown. Brown's visits with Rev. John Todd, at Tabor, and his experiences in Kansas are well documented.

Hitchcock House is open for tours from May 1st through September 30th. Tours start at 1 p.m., and the last tour of the day starts at 4:15 p.m.

The Hitchcock House is closed on Mondays.

Tours are $5 per person, high school age and older. All proceeds are used to support programs, maintenance, and for purchasing additional furnishings for the house.