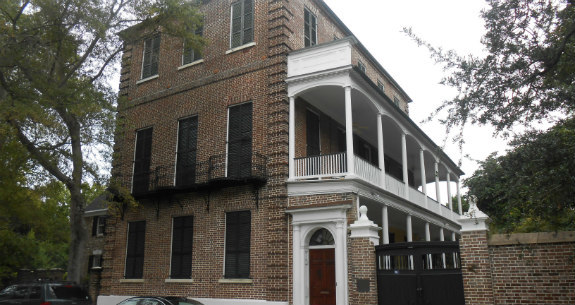 According to The Charleston Museum:

Built in 1772, this Georgian-style double house was the town home of Thomas Heyward, Jr., one of four South Carolina signers of the Declaration of Independence. A patriot leader and artillery officer with the South Carolina militia during the American Revolution, Heyward was captured when the British took Charleston in 1780. He was exiled to St. Augustine, Florida, but was exchanged in 1781.

The City rented this house for George Washington's use during the President's week-long Charleston stay, in May 1791, and it has traditionally been called the "Heyward-Washington House." Heyward sold the house in 1794 to John F. Grimke, also a Revolutionary War officer and father of Sarah and Angeline Grimke, the famous abolitionists and suffragettes. It was acquired by the Museum in 1929, opened the following year as Charleston's first historic house museum, and was recognized as a National Historic Landmark in 1978.

Here you will see a superb collection of historic Charleston-made furniture including the priceless Holmes Bookcase, considered one of the finest examples of American-made colonial furniture. The property also features the only 1740s kitchen building open to the public in Charleston as well as formal gardens featuring plants commonly used in the South Carolina Lowcountry in the late 18th century.