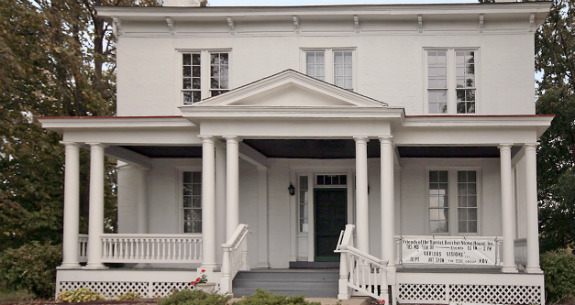 The house was home to Harriet Beecher Stowe prior to her marriage and to her father, Rev. Lyman Beecher, and his large family, a prolific group of religious leaders, educators, writers, and antislavery and womens rights advocates. The Beecher family includes Harriet's sister, Catherine Beecher, an early female educator and writer who helped found numerous high schools and colleges for women; brother Rev. Henry Ward Beecher, a leader of the womens suffrage movement and considered by some to be the most eloquent minister of his time; General James Beecher, a Civil War general who commanded the first African-American troops in the Union Army recruited from the South; and sister Isabella Beecher Hooker, a womens rights advocate.

The Beechers lived in Cincinnati for nearly 20 years, from 1832 to the early 1850's, before returning East. Shortly after leaving Cincinnati and basing her writing on her experiences in Cincinnati, in 1851-1852, Harriet Beecher Stowe authored the best-selling book of its time, Uncle Tom's Cabin, a fictionalized popular account of the pain slavery imposed on its victims and of the difficult struggles of slaves to escape and travel, on the Underground Railroad, to freedom in the northern states or Canada. Published just after the draconian fugitive slave laws were enacted by the US Congress in 1850, the book made Harriet Beecher Stowe's name a household word in the United States. Uncle Tom's Cabin has been published in over 75 languages and is still an important text used in schools all over the world. Written at a time when women did not vote, have legal rights, or even speak in public meetings, Uncle Tom's Cabin became an important part of the social fabric and thought that eventually caused the Civil War to break out and the southern slaves to be emancipated by President Abraham Lincoln, effective in 1863. Uncle Tom's Cabin is a remarkable example of how one person can make a huge impact to improve the lives of millions of people.

When Harriet Beecher Stowe met President Abraham Lincoln in 1862, he is said to have exclaimed, "So you are the little woman who wrote the book that started this great war!"