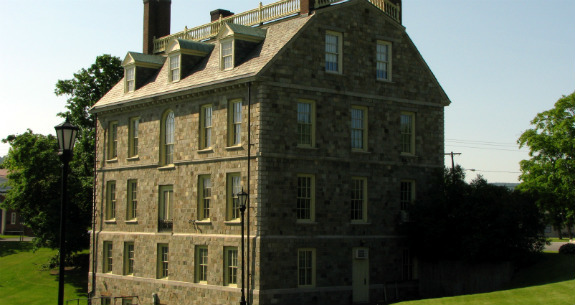 The Hancock House was a gift to The New York State Historical Association (NYSHA) from native son and philanthropist Horace Moses. He built the house as a repository for the purpose of perpetuating “American Traditions in History and the Fine Arts,” and it served in this capacity for many years as the NYSHA “Headquarters House,” although it can no longer claim this title. This imposing Georgian mansion is a replica of Thomas Hancock’s (uncle to John Hancock) Beacon Hill residence built in 1737 and 1741, and demolished in 1863.

The Hancock House was erected in 1926 and presented to the Association by Horace A. Moses, a native son of Ticonderoga, to further the interest of the people of northeastern New York and the Lake Champlain and Lake George valleys in history and the fine arts. After careful consideration the house was constructed as a replica of the famous John Hancock home which stood on Beacon Street in Boston and which was demolished in 1863 to make room for a new wing of the State House. John Hancock, the Revolutionary patriot, second president of the Continental Congress, signer of the Declaration of Independence and later Governor of Massachusetts, was a rich Boston merchant and his home was one of the finest of Colonial mansions. The original house was erected in 1737 by Hancock’s uncle, Thomas, and was a “wonder-house” in its day. The stone trim was contracted for in the “tenth year of the reign of George the Second” with one Thomas Johnson of Middletown, Connecticut. Undoubtedly, many figures of prominence in the early history of the Champlain Valley well knew the original Hancock House and its hospitable hosts.