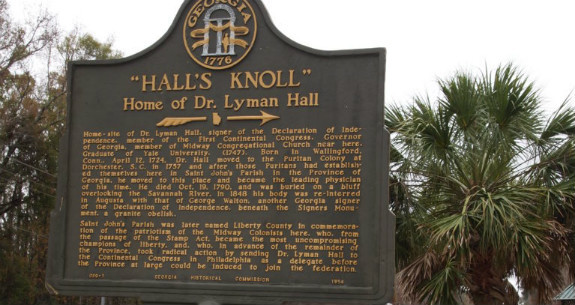 Home-site of Dr. Lyman Hall, signer of the Declaration of Independence, member of the First Continental Congress, Governor of Georgia, member of Midway Congregational Church near here. Graduate of Yale University, (1747). Born in Wallingford, Conn., April 12, 1724. Dr. Hall moved to the Puritan Colony at Dorchester, S.C. in 1757 and after those Puritans had established themselves here in Saint John’s Parish in the Province of Georgia, he moved to this place and became the leading physician of his time. He died Oct. 19, 1790, and was buried on a bluff overlooking the Savannah River. In 1848 his body was re-interred in Augusta with that of George Walton, another Georgia signer of the Declaration of Independence, beneath the Signers Monument, a granite obelisk.

St. John’s Parish was later named Liberty County in commemoration of the patriotism of the Midway Colonists here, who, from the passage of the Stamp Act, became the most uncompromising champions of liberty, and, who, in advance of the remainder of the Province, took radical action by sending Dr. Lyman Hall to the Continental Congress in Philadelphia as a delegate before the Province at large could be induced to join the federation.