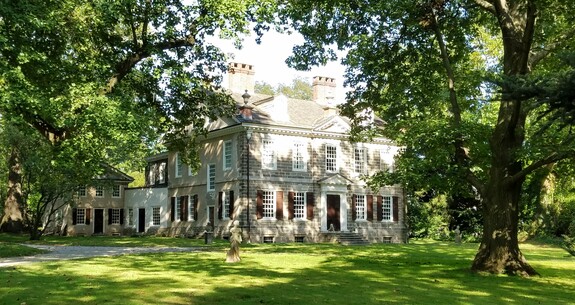 After the British occupy Philadelphia, General Washington plans an attack against British forces camped just outside the city at Germantown. Washington plans a multi-column attack. The main division gets delayed trying to eject a British company that is holed up in a stone house. Other divisions get lost in the fog and end up firing on each other.

General Cornwallis brings up reinforcements from Philadelphia and forces the Continentals to abandon their attack. Shortly after this, the Americans go into winter quarters at Valley Forge. General Adam Stephen is later court martialed and dismissed from the Continental Army for his poor performance that day.

Cliveden, a National Trust for Historic Preservation site, preserves and interprets over 200 years of American history through the lives of the Chew family and their staff, both enslaved and in service. During the Revolutionary War, British troops barricaded themselves inside the house during the 1777 Battle of Germantown. After the war, Chew regained Cliveden and it remained in the Chew family for six generations.

Entrance fee: See the Cliveden web site for information about fees for tours.

Cliveden was built in 1767 as the summer home of Benjamin Chew, a member of colonial Pennsylvania’s influential elite. The Chew family transferred ownership of Cliveden, its remaining 5 ½ acres of parkland, and its collection of artifacts to the National Trust for Historic Preservation in 1972.

You can walk the 5 ½ acres and view interpretive panels. The carriage house contains exhibits. Tours of the house are also offered.

The annual Revolutionary Germantown Festival is held on the grounds the first weekend in October, featuring two battle re-enactments.

Check the Cliveden web site for information on hours of operation.