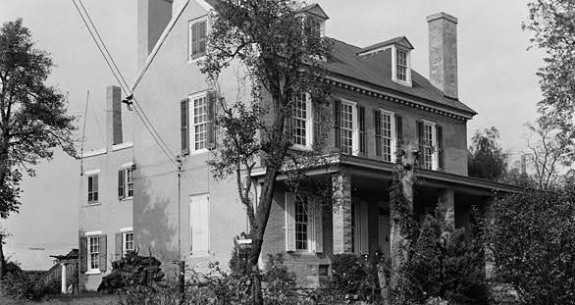 Sometimes also called Stoneham, this was George Read's country retreat. The house is the only extant one associated with him. His principal residence, which he built in 1763 and lived in until his death in 1798, was destroyed by fire in 1824. The site is situated on The Strand in New Castle Historic District, about a mile away.

Stonum estate had been granted by William Penn to William Houston, and was subsequently owned by various others before Read purchased it, apparently in the 1750's. The earliest section of the building, the present rear part occupied by the kitchen, is a flat-roofed, two-story structure with an interior chimney. It dates from about 1730.

When flood damage on his marshy land led Read to sell the property in 1789, the main wing had already been built, but whether prior to or during his ownership is not certain. This section was attached to the south, or front, of the older building to form an L-shaped residence. Its panoramic view of the Delaware River has long since been obscured by industrial development.

All that now remains of the estate is a plot of less than an acre on the outskirts of New Castle. The building is in fair condition but has been altered considerably.

Stonum, is now a private residence and is not open to the public.