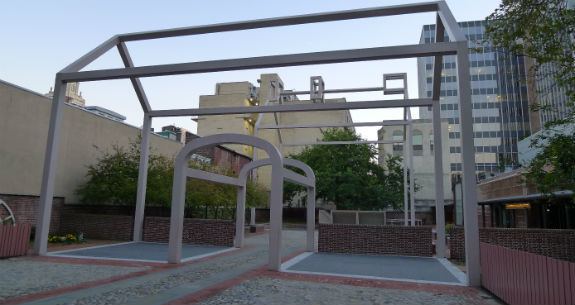 Franklin Court was the site of the handsome brick home of Benjamin Franklin, who lived here while serving in the Continental Congress and the Constitutional Convention. Franklin died here in 1790; the house was torn down 22 years later. Today the site contains a steel "ghost structure" outlining the spot where Franklin's house stood and features the Benjamin Franklin Museum, a new museum that explores Franklin's life and character through artifacts, animations, and hands-on interactives. The Franklin Court complex also includes a working reproduction of an 18th century printing office, an architectural/archeological exhibit, and an operating post office.

The Development of Franklin Court

After decades as renters, Benjamin and Deborah decided to build a home for themselves on land behind their Market Street properties. Having arranged with master carpenter Robert Smith to build the house in the quiet garden courtyard, Franklin left for London and entrusted his wife with managing the details of building and furnishing their home. His letters to her often included specific instructions about the work that needed to be done. Look for excerpts from their letters on the viewing portals and on paving through the outdoor exhibit.

Franklin made major improvements to the property in the five years before his death. He built a printing shop, bindery, and foundry for his grandson, Benjamin Franklin Bache. He added a new wing that included a large dining room, library, and additional bedrooms. He also built two substantial rental properties on Market Street flanking an arched carriageway into his court.

In 1948, Congress created Independence National Historical Park, which included Franklin Court. After the National Park Service began a closer investigation of the courtyard, archeologists located the outline and basement features of Franklin’s house. In 1972, experts met to decide whether to reconstruct Franklin’s house in preparation for the bicentennial of American independence. As evidence of the building’s original design was incomplete, they decided to create a representational design.

Philadelphia architects Robert Venturi, William Rauch, and Denise Scott Brown designed space frames following dimensions recorded in Franklin’s property insurance. The steel-framed “ghost structures” give scale to Franklin’s property. His house was large for the 18th-century city, and unusual because it sat within a garden court, away from Market Street. Viewing portals provide visitors with a glimpse of the original cellar kitchen to the Franklin mansion.

Since its opening on April 20, 1976, Franklin Court has received acclaim for its bold and innovative interpretation. In 1985, the Venturi and Rauch firm won the Presidentialaward for its design excellence.

In 2013, the site was renovated for new generations. New accessibility improvements made the ghost structure accessible to visitors with mobility impairments. But the most notable change occurred below the courtyard—the Underground Museum, which opened in 1976, closed to make way for the new Benjamin Franklin Museum, which explores Franklin's life and legacy using artifacts, videos, and computer interactives.