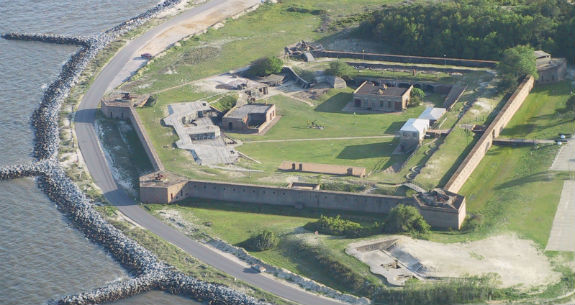 Established in 1821, Fort Gaines is a pre-Civil War masonry fort best known for its role in the Battle of Mobile Bay ("Damn the Torpedoes- Full Speed Ahead!").

The site consists of five buildings inside the exterior walls, tunnel systems and corner bastions with spiral stone staircases to the gun placements above. Fort Gaines is famous for displaying the cannons that were actually used in the battle and the anchor from Admiral Farragut's flagship, as well as maintaining its operational blacksmith shop and kitchens.

Described as one of the best preserved 19th century shoreline fortifications in the east, it is located within feet of the Gulf of Mexico. After its capture by Union forces, it was used in planning and staging the final attack on Mobile.

More recent modifications include "disappearing guns" and bunker systems constructed during the Spanish-American War. All guests are given a detailed self-guided tour and history brochure. Guided tours are available with advance notification and include cannon firing, blacksmithing, etc. An excellent Museum portrays not only the Civil War but the fascinating history of Dauphin Island including its French colony in the 1600s and its role as Capital of the Louisiana Territory. A gift shop with an excellent selection of history books and additional exhibits are also provided.

Hours of operation:
9:00 AM to 5:00 PM
Closed on Thanksgiving Day, Christmas Eve, and Christmas Day