Established in 1927, when Clinton S. Harley, then General Manager of Evergreen-Washelli and a veteran of the Spanish American War, offered a large section of the cemetery for the burial of veterans and their spouses. Dubbed as the "The Arlington of the West” every year a service was held at the cemetery every Memorial Day.

Shortly after the cemetery was established, the American Legion donated a tall, white flagpole, which has proudly flown our nation’s Colors without interruption ever since. Each time a flag needs to be replaced, one is generously provided by the family of a deceased veteran.

Another donation was a Chimes Tower, added in the 1950’s, which rings the hours with its carillon. It stands as a permanent memorial to veterans who were buried elsewhere, but who are remembered by friends and relatives.

Guarding the walkway to the Chimes Tower are two carronades that were removed from the scarred and battered deck of the U.S.S. Constitution.

The presence of these thirty-two pound guns and other symbols of military honor within the Veterans’ Memorial Cemetery serve to remind us that eternal vigilance is the price of freedom. 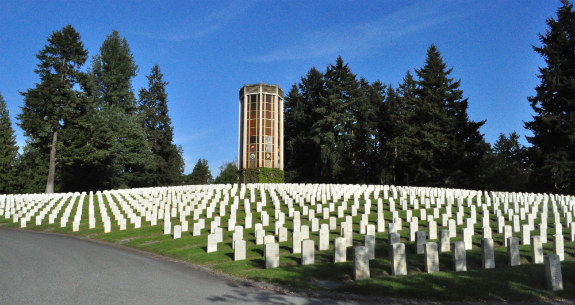