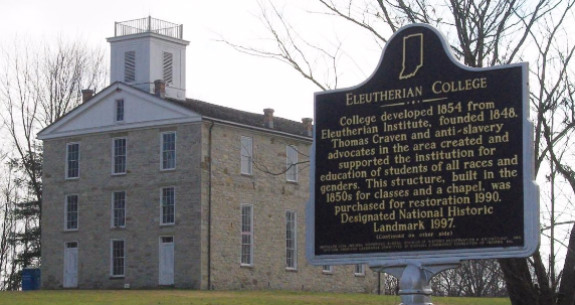 Eleutherian College was founded in 1848 by Reverend Thomas Craven of Oxford, Ohio who came to Lancaster as a guest preacher at the Neil Creek Abolition Baptist Church. Lancaster, ten miles north of Madison, IN was an anti-slavery strong hold in the pre-Civil War era. The Underground Railroad operated nearby hiding slaves fleeing to the north. Craven told of his dream where people of all races and genders would attend classes together. Many residents of the area offered to help and, working together, a school dedicated to freedom and equality was built on a hill overlooking the community. The name of the college was derived from the Greek word eleutherous, meaning freedom or equality.

Classes began in an old meeting house near the village sawmill along neighboring Middle Fork Creek. By 1854, the large stone building was compleed on College Hill. The strone was quarried nearby, the timber was readily available, and most of the labor was volunteered.

In 1856 there were 18 black students, 10 of whom were born slaves. in 1860, 200 students were enrolled in the college. Disbanded shortly after the Civil War, Eleutherian became a teacher training school in 1878. Ten years later it was deeded to the township and was used as a grade school until 1937.

More about the history of Eleutherian College, Inc.