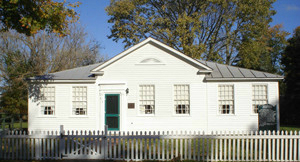 Photo by Village of Schoolcraft

It is a small house but in the 19th century, it played an important part in the Nation’s history.  In the early 1840’s, people sympathetic to slaves seeking to escape from the South organized a system by which they could reach freedom in Canada safely and quickly.  Since it was illegal to assist escaping slaves and, therefore, kept secretive, this system was called the Underground Railroad.  Arrangements were made for overnight sanctuary for the fugitives in private homes, called Stations, and for transportation to the next hiding pace in their journey.

When the Underground Railroad passed through Southern Michigan, Dr. Nathan Thomas, an ardent Quaker Abolitionist living in Schoolcraft was asked to open his home as a Station. He quickly agreed for he had been providing such sanctuary for many years.  Dr. Thomas, the first physician in Kalamazoo County, had built a small two-room office on Cass and Centre Streets in 1835.  After his marriage to Miss Pamela Brown in 1840, he added two wings to the original structure and raised the roof to allow two rooms upstairs.

During the twenty years, the Station was in operation, 1,000 to 1,500 escaping slaves were given food, shelter, medical aid, and encouragement. The home was often crowded for the four Thomas children were born during those years. Yet, there was always room for the unexpected guests and Mrs. Thomas’ hours were full with extra meals to cook and beds to be made ready.

Shortly after the Civil War, Dr. Thomas built on the same corner, a new, palatial brick home. The old frame house was retired and moved to its present location on East Cass Street in 1868. Here it has remained for over a century and a quarter.

In 1975, the Underground Railway House was purchased by the Schoolcraft Historical Society. Since that time, the house has been restored to its present status and listed in the National Register of Historic Places.

The Underground Railway House now stands as a tribute to the courage of those who would not tolerate slavery and south freedom, and of those who gave them aid in their flight.  Additionally, the house provides an example of life in Southwestern Michigan during the middle years of the 19th century.