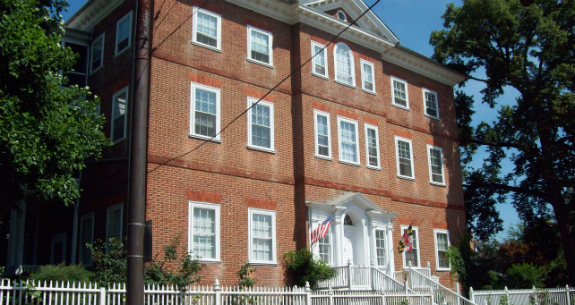 "Young Maryland lawyer and future signer of the declaration of independence, Samuel Chase, started the construction of the Chase-Lloyd house in 1769 when he was just 25.  Before Chase ran out of money in 1771, the unknown architect and builders Chase hired finished the foundation and outer shell of the Georgian style mansion. From its unusually tall three-story height, it is evident that Chase wanted his home to rival those of his far wealthier neighbors in grandeur. He, however, had to sell the unfinished mansion and settle for a less grand home elsewhere.

Chase sold the house to the wealthy plantation-owner, Edward Lloyd IV. Like Chase, Lloyd wanted a home in Annapolis so that he could establish himself in politics. At the time of the purchase, he had just been elected as delegate for Talbot County on the eastern shore where his plantations and primary residence were located. Lloyd hired the famous colonial architect, William Buckland, to finish the interior.

William Buckland continued the perfect Georgian symmetry of the outside of the home on the inside. He even installed false doors to keep the symmetrical aesthetic going on the first floor. The contrast of the austere elegance of the exterior and elaborately decorative moldings and plaster ceilings of the interior are also indicative of the Georgian style. The height of Buckland skill is, however, shown in the central cantilevered staircase and the Palladian window that the first tier of the staircase leads to. Buckland finished the home in 1774.

The Chase-Lloyd House is one of the last of its kind to be built in Annapolis. Though the house has been restored and updated for modern use many times, it has remained true to its initial design."