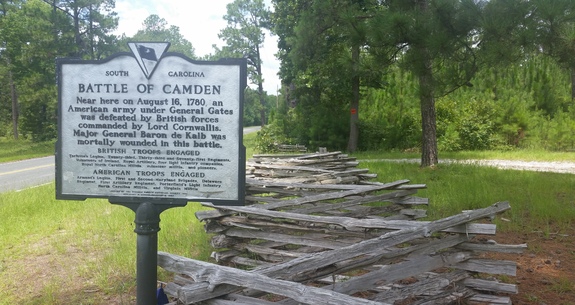 After the fall of Charleston, General Washington sends a second army to South Carolina under the command of General Horatio Gates. British General Cornwallis moves out of Charleston to confront Gates at Camden.

Many American soldiers flee the field, despite facing a smaller enemy. Some forces stand, including those under General Johann de Kalb, a German-born Continental officer. General Gates abandons what is left of his army to ride back to Philadelphia and try to justify what happened. He is disgraced and never receives another command.

Historic Camden maintains land and structures significant to the American Revolution at its 107-acre Broad Street Campus. Historic Camden also owns and manages over 450 acres of the core battlefield of the Battle of Camden.

When you visit the Broad Street Campus you can view Colonial-era houses, reconstructed palisade walls, redoubts, and a powder magazine. On a guided tour you can also see the reconstructed Kershaw-Cornwallis House. It was originally built circa 1777-1780 by Joseph Kershaw, a wealthy merchant. The house served as headquarters for General Cornwallis and other British officers.

At the Camden Battlefield and Longleaf Pine Preserve site, you can walk 3 miles of trails and view interpretive signs about the battlefield.

Guided tours of the Broad Street Campus and the Camden Battlefield are available. See the Historic Camden web site for details on offerings and pricing.

Typically, there is a Battle of Camden commemoration ceremony in August.

Check the Historic Camden web site for information on hours of operation of both sites.