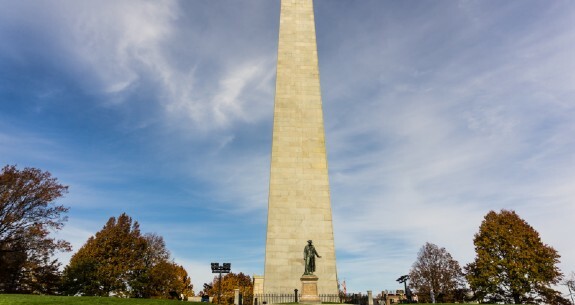 British reinforcements arrive in Boston a month after the Siege of Boston begins. Believing that the British are preparing to capture high ground around Boston, New England commander Artemas Ward approves the occupation of Bunker Hill an effort to oppose the British move. Generals Israel Putnam and Joseph Warren support Colonel William Prescott, who throws together a defensive line on Breed’s Hill, just in front of Bunker Hill.

The British, under the command of General William Howe, make several attempts to take the hill with direct assaults, only to be pushed back each time. Finally, running out of ammunition, the Americans abandon their position in the final assault. General Warren is killed during the withdrawal. Although the British take the hill, they do so at a terrible cost. The battle is the bloodiest day of the war for the British.

Atop Breed’s Hill stands the Bunker Hill Monument, with its cornerstone set by the Marquis De Lafayette fifty years after the Battle of Bunker Hill. The 221-foot-tall obelisk, built entirely from quarried granite, marks the site where Provincial forces constructed an earthen fort (redoubt) in advance of the battle. The Bunker Hill Monument, Lodge, and Museum are managed by the National Park Service.

You can visit three sites at which the National Park Service interprets the Battle of Bunker Hill: