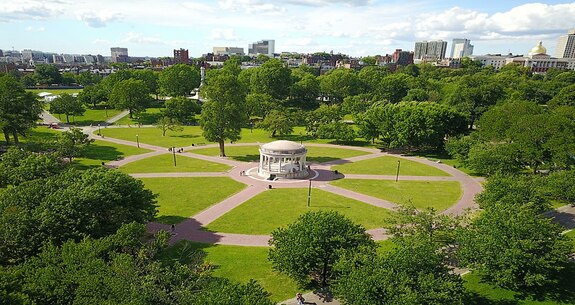 Founded in 1634, it is the oldest city park in the United States. The Boston Common consists of 50 acres (20 ha) of land bounded by Tremont Street (139 Tremont St.), Park Street, Beacon Street, Charles Street, and Boylston Street.

A visitors' center for all of Boston is located on the Tremont Street side of the park.

From Colonial times to the present day, the Common has been at the center stage of American history. It has witnessed executions, sermons, protests, and celebrations, and it has hosted famous visitors from Generals Washington and Lafayette to Reverend Martin Luther King Jr. and Pope John Paul II. In Colonial times, it served as a meeting place, pasture, and military training field. Bostonians in the nineteenth century added tree-lined malls and paths and, following the Civil War, monuments, and fountains. The twentieth century saw victory gardens, troop entertainment, rallies for civil rights and against the Vietnam War, and the first papal mass in North America.

Today, Boston Common is open for all to enjoy.