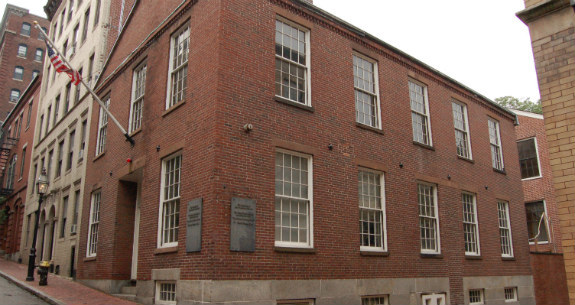 The historical site is located on Beacon Hill, a neighborhood just north of the Boston Common. The site was designated in 1980 to "preserve and commemorate original buildings that housed the nineteenth-century free African-American community on Beacon Hill." That year President Jimmy Carter signed bills authorizing this and the Martin Luther King, Jr. National Historic Site, as well as one to establish the National Afro-American Museum and Cultural Center in Wilberforce, Ohio. He said:

The two bills that I will sign today represent a three-pronged effort to preserve a vital, but long neglected, part of American heritage; the history and culture of Americans of African ancestry and their role in the history of our nation.

Boston's first African residents arrived as slaves in 1638 with early colonists. Over time, more of their descendants were born free to white mothers; in other cases slaveholders freed slaves for service. After the American Revolutionary War, Massachusetts effectively abolished slavery by the terms of its new constitution. By the 1790 census, no slaves were recorded in Massachusetts. African Americans became activists in the abolition movement, also working to gain racial equality and educational parity with whites. They engaged in political processes to meet their objectives.

Before the Civil War, more than one half of the 2,000 African Americans in Boston lived on the north slope of Beacon Hill; blacks also lived in the West End north of Cambridge Street, and in the North End. These areas gradually were occupied by new groups of immigrants after African Americans moved to southern areas of Boston. (The North End became a center of Italian immigrants in the late 19th and early 20th centuries.)

The historic site is one of 20 National Park Foundation sites featuring African-American history.