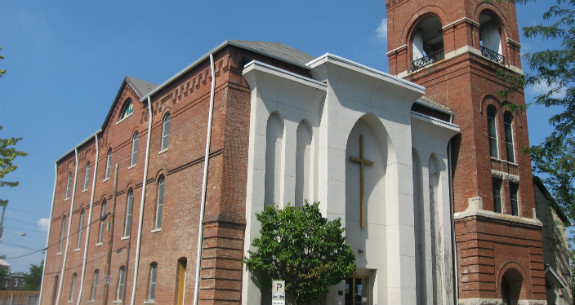 The first AME church in Indianapolis, the Bethel African Methodist Episcopal Church has played an important role in the city's black community for over 160 years.

Originally founded in 1836 by William Paul Quinn and Augustus Turner, the church, then known as "Indianapolis Station," started with a small congregation that met in Quinn's log cabin. In 1841 a small house of worship was constructed, and by 1848 the church had 100 members and became active in the antislavery movement, often harboring fugitive slaves en route to Canada. Their promotion of the abolitionist movement and their activities in the Underground Railroad were not well received by some members of the local community. Supporters of slavery are believed to be the cause of the fire that destroyed the church in 1862. Undaunted by this tragedy, the congregation raised money to rebuild the church in 1867-- the same church that stands today. Known as the "mother church" of the African Methodist faith in Indiana, Bethel also played an important role in the community after the Civil War.

Bethel opened schools for African Americans throughout the city, and a kindergarten was at one time operated in the church building. Numerous organizations were established at Bethel, including the Indianapolis chapter of the NAACP and the Indiana State Federation of Colored Woman's Clubs. Bethel AME has been a vanguard in the advancement of the AME movement and occupies a unique place in the history of the Underground Railroad.

The building has recently been sold and is set to become a hotel.

More about Bethel AME Church at the National Park Service.