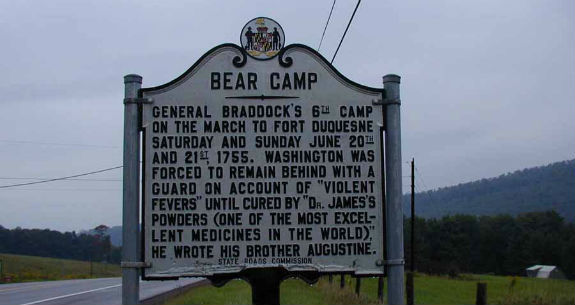 General Braddock's 6th Camp on the march to Fort Duquesne Saturday and Sunday June 20th and 21st, 1755. Washington was forced to remain behind with a guard on account of "violent fevers" until cured by "Dr. James's Powders (one of the most excellent medicines in the world)", he wrote his brother Augustine.

The distance to Bear Camp - the sixth encampment - from the preceding camp is about nine miles. Captain Orme say, "We would not reach our ground until about 7 o'clock, which was three hours later than common, as there was no water, not even earth enough to fix a tent, between the great mountain and this place." The camp is less than one half-mile south of the Pennsylvania and Maryland boundary line at Oakton [now Strawn]. This is one of the most picturesque places for an encampment along the entire route.