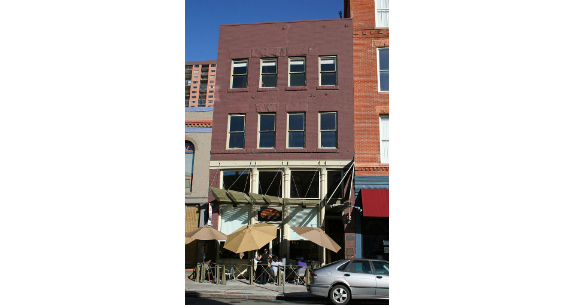 Photo by Jeffrey Beall / CC BY

The building at 1514 Blake Street was one of the earliest commercial successes for Barney L. Ford, a pivotal black leader in the early history of Colorado. Ford was a black pioneer, businessman, civic leader and politician who actively fought for African American civil rights in his state. Born January 22, 1822 in Stafford, Virginia, Ford grew up as a slave on a South Carolina plantation but escaped to Chicago. He became active in the abolition movement while in Chicago after meeting Henry O. Wagoner, an active member of the Underground Railroad. Ford later married Wagoner's sister-in-law Julia.

The Fords moved to Colorado, purchased land on Blake Street in Denver and built a small building there only to have it destroyed by fire the following year. He rebuilt the current brick building in which was located a restaurant, bar, barber shop and hair salon. From this initial business venture, Ford expanded his commercial holdings steadily. By 1854, Ford was generating the 14th highest income in the state of Colorado, the result of his numerous income-producing properties, including hotels in Denver and Cheyenne, Wyoming. Ford played a significant role in the admission of Colorado to the Union as a free state. A member of the Republican party, Ford was the first African American to be nominated to the Territorial Legislature. In 1865, Ford successfully lobbied the Federal government for black voting rights in Colorado, enlisting the support of Senator Charles Sumner of Massachusetts.