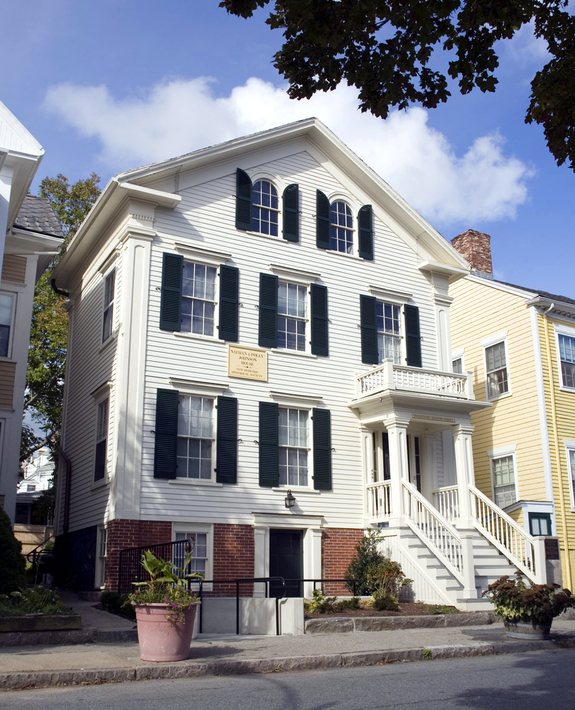 The Nathan and Polly Johnson House, home of the New Bedford Historical Society.

The New Bedford Historical Society Inc. was founded in October 1996 and awarded 501(c)(3) status in September 1999 as a not-for-profit organization dedicated to documenting and celebrating the history, legacy and presence of African Americans, Cape Verdeans, Native Americans, West Indians and other people of color in New Bedford, Massachusetts. We are an all-volunteer grassroots organization.

For the past 18 years the New Bedford Historical Society has worked to celebrate the history and culture of people of color, adding much to the cultural landscape of the Greater New Bedford area through our special events and educational programming. Our members have been important voices and advocates as we assist community residents to tell their stories and document the history of the Native peoples, African Americans, Cape Verdeans, and others who made New Bedford their home. The Society has been a leader in providing educational programs for community members and children in area schools so that they too can be proud of the role their family members have had in the development of the history of New Bedford.

We are proud of the historic milestones and grateful for the interest in supporting the New Bedford Historical Society in its mission to ensure that current and future generations know of the amazing events and the people that have shaped our nation’s democracy. Our members hope to preserve the legacy of our forefathers and mothers, who through their bravery, ingenuity and zeal advanced the cause of freedom.

Over the past several years the New Bedford Historical Society has:

•Designed and participated in teacher professional development workshops for area K-12 teachers at the University of MA Dartmouth. Workshops have focused on New Bedford’s African American History, the Underground Railroad, and local abolitionist activities of the 19th century.


•Created Hidden History, an out-of-school program and summer program for middle school students that shines a light on local history and culture while teaching tolerance and respect for cultural and racial diversity.


•Completed phase I of a $200,000 exterior restoration of the Nathan and Polly Johnson House, a National Historic Landmark noted for its link to the Underground Railroad and as the first free home of Frederick Douglass, 19th Century abolitionist.

The Nathan and Mary (Polly) Johnson House, the first home in freedom for Frederick Douglass.

In December 1998, the Society acquired the Nathan and Polly Johnson House at 21 Seventh Street in New Bedford. From the early years of the 19th century until the onset of the Civil War, this building was an important stop on the Underground Railroad for many escaped slaves who later became residents of New Bedford or passed through the City on their way to points further north and to freedom. The Johnson’s were prosperous African Americans who were well known for their extensive work in the anti-slavery movement. Their home was the base for the couple’s catering and confectionary business. In addition, the Johnson’s were instrumental in assisting Frederick Douglass as he settled into his new life in New Bedford as a free man after escaping slavery in 1838. The Nathan and Polly Johnson House is the only remaining structure in which Frederick Douglass lived during his seven years in New Bedford (1838–45). Through the work of the New Bedford Historical Society, the Nathan and Polly Johnson House was designated a National Historic Landmark by the Secretary of the Interior in 2000, one of a select few properties in New Bedford that has won this status.

The Society is currently working to restore and renovate the Johnson House to serve as a museum and exhibit space highlighting the contributions of people of color. Our members seek to establish a solid base of research and educational programs that present the contributions of people of color as part of the life and history of the region as well as a part of the permanent, public record. In the process, the history of the region in general will become fuller, deeper, and richer for everyone.