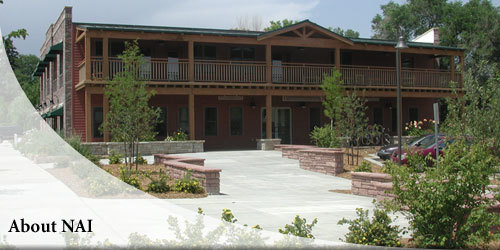 The National Association for Interpretation (NAI) is a not-for-profit 501(c)(3) professional association for those involved in the interpretation of natural and cultural heritage resources in settings such as parks, zoos, museums, nature centers, aquaria, botanical gardens, and historical sites. For more than 50 years, NAI and its parent organizations have encouraged networking, training, and collaboration among members and partners in support of our mission: inspiring leadership and excellence to advance heritage interpretation as a profession.

NAI was founded in 1988 from two existing organizations, the Association of Interpretive Naturalists (founded in 1954) and the Western Interpreters Association (founded in 1965). From 1954 to 1988, AIN and WIA operated as two separate professional organizations with offices in Needwood, Maryland, and Sacramento, California, respectively. After merging to form NAI, the office was moved to Fort Collins, Colorado, creating a partnership with Colorado State University’s Department of Natural Resource Recreation and Tourism that provided initial office space. A growing staff required a move to a nearby Victorian house of 900 square feet, though CSU students continue to work in the office as interns and work-study employees. By June 2004, NAI employed 10 full-time staff and moved into a new 8400-square-foot office and training facility in the historic Old Town of Fort Collins, Colorado. Although the building is owned by NAI, almost half of that space is leased to Rocky Mountain Bird Observatory and National Parks Conservation Association.

The National Association for Interpretation