The estate is popularly known as Hearst Castle In 1865, George Hearst, a wealthy miner, purchased 40,000-acres of ranchland that included the Mexican Ranchos of Piedras Blancas, San Simeon and Santa Rosa. In 1919, his only son, William Randolph Hearst, inherited the land from his mother, Phoebe Apperson Hearst. By then the ranch had grown to encompass 250,000 acres.

Originally known as “Camp Hill,” its wilderness offered a place for family members and friends to “rough it” on camping trips. Despite elaborate arrangements with separate sleeping and dining tents, Hearst envisioned more comfortable accommodations. His simple instructions to famed San Francisco architect Julia Morgan in 1919: “Miss Morgan, we are tired of camping out in the open at the ranch in San Simeon and I would like to build a little something”

Hearst and Morgan’s collaboration was destined to become one of the world’s greatest showplaces. As they were planning and constructing his dream home, Hearst renamed the rocky perch from which it rose “La Cuesta Encantada” – The Enchanted Hill. By 1947, Hearst and Morgan had created an estate of 165 rooms and 127 acres of gardens, terraces, pools and walkways. 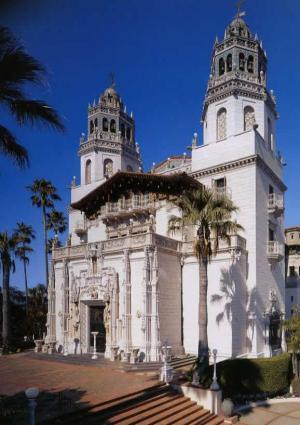 The estate’s magnificent main house, “Casa Grande,” and three guest houses are of Mediterranean Revival style, while the imposing towers of Casa Grande were inspired by a Spanish cathedral. The blending of the architectural style with the surrounding land, and Hearst’s superb European and Mediterranean art collection, was so seamless that world-renowned architectural historian, Lord John Julius Norwich, was moved to say that “Hearst Castle is a palace in every sense of the word.”

Hearst Castle is one of the largest of approximately 5,000 historic house museums in the U.S., with one of the most sophisticated guided tour programs in the country. Once the home of William Randolph Hearst, California State Parks strives to keep the estate looking like a private residence. The historic museum tours take the visitor back into time through the interpretation of a combination of many aspects regarding the historic California estate, including William Randolph Hearst and his family, and the collection, architecture, gardens and lifestyle at the Castle. Formal guide training is an integral aspect of Hearst Castle. Castle tour guides are initially trained a total of 168 hours with additional in-service training and ongoing independent study between tours, resulting in a high quality interpretive experience for all who visit this magnificent California vacation attraction known as “The Enchanted Hill.”

As early as 1952 President Sproul of UC Berkeley proposed that William Randolph Hearst’s ranch at San Simeon be given to the Division of Beaches and Parks as a monument. Trial tours of the historic mansion and estate undertaken in September 1952, lasted over two hours but were quickly pared down to one hour plus the bus trip up and down the hill.

Donated to the People of the State of California in December 1957 by the Hearst Corporation, dedication ceremonies for the Hearst San Simeon State Historical Monument were held June 2, 1958 at the old visitor’s center. Following the ceremonies, attraction tours opened to the public at 1:00 p.m. on a first-come, first-served basis. Tickets were $2 for adults and $1 for children 6-12. There was only one tour, now called Tour 1, and its route was similar to today’s Tour 1, covering the first floor rooms of Casa Grande and one of the three guesthouses. Today there are three distinct daytime tour routes, each with a guide leading visitors through different areas of the estate and museum.

In the summer of 1964, the State introduced Tour 2 to provide viewing and interpretation of the upper rooms of the main house, Casa Grande. In June 1968, Tour 3 was added, and in 1982, Tour 4. Accessibly-Designed Tour began in 1974, and cover the ground floor of the main house (including the kitchen), the gardens and pools, and the main level of one guesthouse, Casa del Mar.

Over the years the public indicated an interest in touring the estate at night. In response, a pilot program for an Evening Tour of the estate and museum was developed and presented for the first time on April 21, 1989. The interpretive objective of this program is to recreate an evening at Hearst Castle in the 1930′s, with a general emphasis on the social history of 1930-1935 and, more specifically, on Hearst employees and former guests. Docents in the Living History Program, dressed in period clothing, provide tableaus illustrating the social history discussed on tour. The Evening Tour is available most Friday and Saturday nights in Spring and Fall.

Reservations are always strongly recommended.  Tour reservations can generally be made up to 7 to 8 weeks in advance.  All entrance to the historic hilltop estate is by paid tour admission.

All daytime tours also include a ticket for our exclusive 40-minute film Hearst Castle – Building the Dream, shown on a five-story screen at the Visitor Center’s Hearst Castle Theater. This fascinating glimpse behind the scenes is shown all day at forty-five minute intervals. The first screening begins at 8:15 am.

This tour is recommended for first-time visitors to the California estate. It also has the fewest stairs to climb. Every evening, W. R. Hearst’s guests gathered in the grand social rooms on the ground floor of Casa Grande (his formal name for the twin-towered building, or main house). Follow their footsteps as you travel back in time and experience what it was like to be a guest at The Enchanted Hill—known today as Hearst Castle, one of California’s top attractions. At the end of the guided portion of your tour, stroll on your own through the gardens and wander at your leisure around the Neptune Pool and the Roman Pool—just as Mr. Hearst’s guests did on their vacation in the 1920s and 1930s.

Explore the upper floors of this architectural wonder called Casa Grande—William Randolph Hearst’s name for the twin-towered structure commonly known as Hearst Castle. Ascend its winding staircases to discover the most personal rooms of the California mansion, including W. R. Hearst’s private quarters and also bedrooms assigned to his most honored guests of the home. More than seven thousand books line the walls of two huge libraries, and centuries-old art and furnishings fill every room of the historic home. As you climb, you’ll be treated to sweeping views of the gardens and the distant coastline of California’s Central Coast. At the conclusion of your tour, wander through the Castle’s historic grounds and admire the property’s two swimming pools at your leisure.

Discover two very different parts of this fascinating historic California attraction: tour some of the most personal rooms of the property and some of its most practical ones. View Mr. Hearst’s extensive wine cellar in the basement of the main house. Stroll through the historic gardens to the first building completed on the hilltop, the elegant guest cottage known as House B. Then compare its rooms to those in House A, the Hearst family’s private cottage, which always held a special place in W. R. Hearst’s heart. Conclude your tour of this impressive California attraction by visiting the Castle’s enormous kitchen to appreciate the complexities of entertaining visitors on a grand scale. Then tour the gardens and the property’s swimming pools at your leisure, enjoying the scenery offered by this grand California attraction that you have been glimpsing through the cottage windows.

Offered in the spring and fall of each year, the Evening Tour is a seasonal tour that allows visitors to travel back in time and experience the historic California mansion and attraction in the evening hours as one of Mr. Hearst’s own visitors might have during the 1930s when Hearst Castle was in its heyday. Many socially prominent guests including politicians, journalists and Hollywood movie stars visited the estate. Hearst Castle glitters at night against spectacular sunsets and the evening sky. This tour visits one of the guest houses, Casa del Mar, and many rooms in the main house, Casa Grande, including several of the large rooms on the ground floor, as well as upstairs rooms including guest rooms, the Main Library and Mr. Hearst’s private Gothic Suite. Visitors will also glimpse guests and staff dressed in 1930s period attire throughout the estate as part of the Living History Program. Visitors will also walk through the gardens and enjoy the spectacular Neptune and Roman Pools sparkling like jewels in the twilight and evening light.

Getting to Hearst Castle

Hearst Castle, one of California’s top vacation attractions, is located on the majestic Central Coast of California. Nestled in the hills at San Simeon, the Castle sits halfway between San Francisco and Los Angeles and is approximately a five hour drive from either of these metropolitan areas. Be sure to check local road conditions before you travel.
Mileage

Hearst Castle is located on California Highway 1, about halfway between San Francisco and Los Angeles. Approximately 230 miles.
From Los Angeles