History of the Grand Union Flag 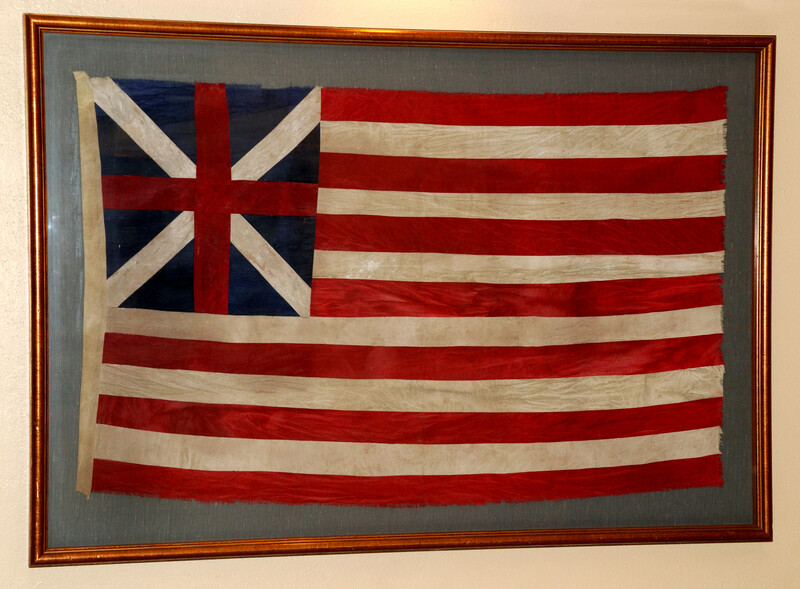 By the end of 1775, during the first year of the American Revolutionary War, the Second Continental Congress operated as a de facto war government authorizing the creation of an Army, a Navy and even a small Marine Corps. A new flag was needed to represent the Congress and fledgling nation, initially the United Colonies, with a banner distinct from the British Red Ensign flown from civilian and merchant vessels, the White Ensign of the British Royal Navy, and the British Union flags carried by the British Army's men on land. Individual states had been using their own independent flags with Massachusetts using the Taunton Flag and New York using the George Rex Flag prior to the adoption of the Grand Union Flag. The U.S. colonists' (Continental Colour) was first hoisted on the colonial warship Alfred, in the harbor on the western shore of the Delaware River at Philadelphia, Pennsylvania on December 3, 1775, by newly-appointed Lieutenant John Paul Jones of the formative Continental Navy. The event had been documented in letters to Congress and eyewitness accounts. The flag was used by the U.S. Continental Army forces as both a naval ensign and garrison flag throughout 1776 and early 1777. It is not known for certain when or by whom the design of the Continental Colors was created, but the flag could easily be produced by sewing white stripes onto the British Red Ensigns. The "Alfred" flag has been credited to Margaret Manny. It was widely believed that the flag was raised by George Washington's Army on New Year's Day, 1776, at Prospect Hill in Charlestown (now part of Somerville), near his headquarters at Cambridge, Massachusetts, (across the Charles River to the north from Boston), which was then surrounding and laying siege to the British forces then occupying the city, and that the flag was interpreted by British military observers in the city under commanding General Thomas Gage, as a sign of surrender.[5] Some scholars dispute the traditional account and conclude that the flag raised at Prospect Hill was probably a British union flag. The name "Grand Union" is contemporary to Reconstruction-era historians and was first applied to the Continental Colors by George Henry Preble, in his 1872 History of the American Flag.

The hang tag that accompanies our "We hold these truths - July 4, 1776” T-shirt includes a lengthy quote from John Adams, writing from Philadelphia on July 3

" . . . the Delay of this Declaration to this Time, has many great Advantages attending it. — The Hopes of Reconciliation, which were fondly entertained by Multitudes of honest and well meaning tho weak and mistaken People, have been gradually and at last totally extinguished. — Time has been given for the whole People, maturely to consider the great Question of Independence and to ripen their judgments, dissipate their Fears, and allure their Hopes, by discussing it in News Papers and Pamphletts, by debating it, in Assemblies, Conventions, Committees of Safety and Inspection, in Town and County Meetings, as well as in private Conversations, so that the whole People in every Colony of the 13, have now adopted it, as their own Act. — This will cement the Union, and avoid those Heats and perhaps Convulsions which might have been occasioned, by such a Declaration Six Months ago."

The Second Day of July 1776, will be the most memorable Epocha, in the History of America.

I am apt to believe that it will be celebrated, by succeeding Generations, as the great anniversary Festival. It ought to be commemorated, as the Day of Deliverance by solemn Acts of Devotion to God Almighty. It ought to be solemnized with Pomp and Parade, with Shews, Sports, Guns, Bells, Bonfires and Illuminations from one End of this Continent to the other from this Time forward forever more. You will think me transported with Enthusiasm but I am not. — I am well aware of the Toil and Blood and Treasure, that it will cost Us to maintain this Declaration, and support and defend these States. — Yet through all the Gloom I can see the Rays of ravishing Light and Glory. I can see that the End is more than worth all the Means. And that Posterity will tryumph in that Days Transaction, even altho We should rue it, which I trust in God We shall not."

Letter from John Adams to Abigail Adams, July 3, 1776, from the archives of the Massachusetts Historical Society. Spelling in the original.

The Continental Congress declared freedom from Britain on July 2 and approved the Declaration of Independence on July 4. The flag was the Continental Navy Ensign, which was first flown December 3, 1775 on the colonial warship Alfred and is considered to be our first national flag. See more on the flag above. 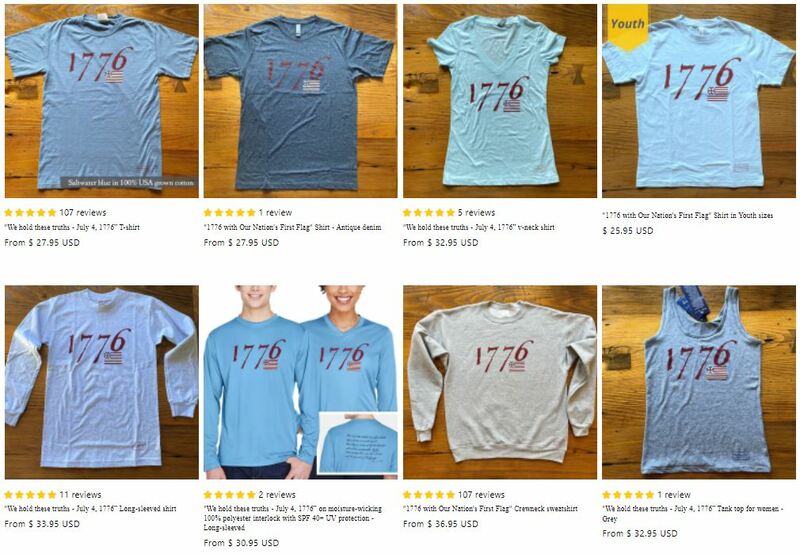 Road trips to historic sites, plus event news and travel tips. Sent once a month.