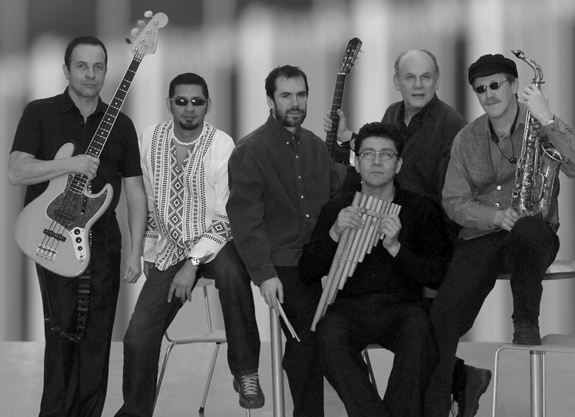 The Porter-Phelps-Huntington Museum will continue its 31st season of Wednesday Folk Traditions on June 20, 2012 with Latin-fusion group, Viva Quetzal. Viva Quetzal plays a variety of musical traditions from Central and South America and beyond, offering a high-energy, polyrhythmic sound experience you won’t want to miss. This and all other concerts are held Wednesday evenings at 6:30 pm in the Sunken Garden at the Porter-Phelps-Huntington Museum, 130 River Drive, Route 47, Hadley, MA 01035. General admission is $10, or $2 for children 16 and under. Picnickers are welcome on the museum grounds beginning at 5:00 pm. This is a smoke-free site.

Viva Quetzal’s unique blending of musical styles and use of over thirty instruments not only delivers a range of melodious rhythms but also represents a coming together of different perspectives. Viva Quetzal’s members—who hail from Latin America and New England—feel that merging musical traditions may help reconcile political, cultural, and linguistic divides throughout the Americas.

Viva Quetzal’s sextet includes Joe Belmont, who has performed with the group since 1992. Belmont’s classical and electric guitar chops are given an added dimension by the Colombian tiple. Roberto Clavijo can be heard performing on quenas, zampoñas, charango, Venezuelan cuatro, and vocals. Born in Chile, Clavijo is a former member of renowned folkloric group Guamary, and has toured much of Central and South America. Jon Weeks plays flute, saxophone, wind synth and more and has performed with many jazz, rock, and Latin bands on the East Coast. Abraham “Abe” Sanchez provides Viva Quetzal with vocals and keyboard. He brings a wealth of musical experience from his native Venezuela, where he was director of a music school and accompanied national and international touring musicians. Viva Quetzal will be joined by Rudi Weeks on bass and Eliezer Martinez on drums. In addition to performing throughout New England, Viva Quetzal has recorded three albums, most recently Hijos del Sol.

At Viva Quetzal’s highly anticipated performance you will hear the sweet, melancholic sound of the quena—an Andean bamboo flute—mingling with the high-pitched strumming of the charango and punctuated by the percussive rattling of the cajón peruano. Come experience Viva Quetzal’s infectious rhythms and lively melodies!

Wednesday Folk Traditions continues on June 27 with a performance by Gokh-Bi System and will continue throughout June and July (with the exception of July 4th). Gokh-Bi System plays unique, vibrant music that draws on Senegalese folk influences and contemporary hip-hop.

Wednesday Folk Traditions is funded, in part, by grants from: the Marion I. And Otto C. Kohler Memorial Fund at the Community Foundation of Western Massachusetts; and the Hadley Cultural Council, a local agency, supported by the Massachusetts Cultural Council, a state agency; and with generous support from many area businesses, including Hadley’s Mountain Farms Mall, Easthampton Savings Bank, and the Walmart Foundation.

The Porter-Phelps-Huntington Museum is located at 130 River Drive (Route 47) in Hadley, two miles north of the junction of Routes 9 and 47. The Museum is open for guided tours Saturday through Wednesday from 1 pm to 4:30 pm and by appointment. The Museum is closed Thursday and Friday. For further information about tours and the Wednesday Folk Traditions series, call the museum at 413.584.4699 or visit www.pphmuseum.org.

We have parking and seating available for those requiring handicapped accessibility. Please note, however, that there are no paved surfaces on the Museum's premises.