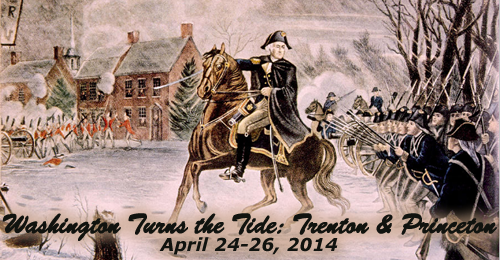 “Tell General Sullivan to use the bayonet. I am resolved to take Trenton,” declared General George Washington on Christmas evening 1776. Washington’s stunning victory over the British army’s garrison of feared Hessians at Trenton fulfilled his order. It was here that a ragged, sleet-soaked Continental army crossed the ice-packed Delaware River to attack German hirelings under Colonel Johann Rall. A week later, the Continental Army stopped the British at Second Trenton, slipping around their flank to rout their rear guard at Princeton. Washington’s complete victories at Trenton and Princeton are considered by some historians to be a more significant turning point in the Revolutionary War than even Saratoga. The Patriot commander’s steadfast determination to lead his troops to victory stabilized sagging morale at a time when the American cause was at its nadir.

The first day of our tour will cover the battles of Trenton in-depth, beginning with a visit to Washington Crossing State Park in Pennsylvania, the site of the famous Christmas night crossing. The new Visitors Center offers a reproduction of Leutze’s famous painting of “Washington Crossing the Delaware” and the boat barn houses replicas of the Durham boats used in the crossing. We’ll cross the river (by bridge, not boat) to the New Jersey landing site and visit the Johnson Ferry House. Our next stop is the Visitors Center to see the nationally recognized Swan Historical Foundation Collection of nearly 900 Revolutionary War era items, including muskets, side arms, swords, clothing, maps, etc.

After lunch, we will follow the march of the Continental Army into the city to the Trenton Battle Monument, where General Nathanael Greene slammed into town and established a critical artillery position, then to where General John Sullivan attacked another part of town. We’ll tour the Old Barracks in downtown Trenton. The Barracks, built by the British during the French and Indian War, housed some of Raul’s Hessians, and has been fully restored, including a gallery of Colonial and Revolutionary War artifacts and militaria.

Then we’re off to Five Mile Run where British Maj. Gen. Charles Lord Cornwallis launched his counterattack against Washington on January 2, 1777. We’ll conclude our first day at the Assunpink Creek where Washington held back Cornwallis. The Douglas House where Washington met with his generals during the Trenton actions is nearby.
We’ll begin the second day at the site marking the start of the Continentals’ march to Princeton and then follow the army’s route to that battlefield, noting the ten interpretative monuments along the way. We’ll discuss the significant events that occurred in each area. Our stop at Stony Brook Bridge will highlight the beginning phase of the action. Then we head to the Princeton Battlefield Park where major combat occurred and the site where General Hugh Mercer was mortally bayoneted. We’ll visit Nassau Hall on the Princeton campus where Alexander Hamilton’s artillery forced the surrender of the British units defending the structure.

After lunch, our final campaign stop will be the Kingston Cemetery where, at a horseback conference, Washington opted to move to Morristown rather than attack New Brunswick.

Although not part of this campaign, our final stop will be the often overlooked house, Rockingham, Washington’s 1783 headquarters – his last of the war. This oft-moved house, now beautifully restored, interprets the last days of Washington’s command. Here he composed his “Farewell Orders to the Armies of the United States,” and enjoyed the fruits of victory that were planted at Trenton and Princeton.

What’s included: motor coach transportation, two lunches, beverage and snack breaks, a map and materials package, all admissions and gratuities, and the services of two experienced tour leaders. Our hotel will provide a complimentary breakfast each day. Tour participants are responsible for transportation to the headquarters hotel, and securing a room reservation, if necessary. Dinner is on your own. Tour goes out rain or shine. Please see our policy page for information about cancellations.

Hotel: We have arranged with the headquarters hotel for a group rate of $99.00 per night plus tax (double or single occupancy.) Parking is available in a public garage next to the hotel at an additional charge. Please call the Lafayette Yard Hotel & Conference Center (formerly the Marriott), One West Lafayette Street, Trenton, NJ 08606 at 609-421-4000 and ask for the America’s History group rate. This rate will be guaranteed until March 24, so please make your reservations soon.