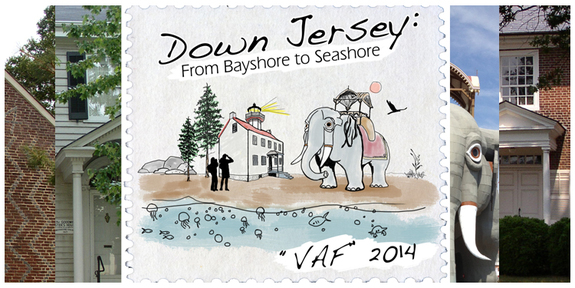 Down Jersey: From Bayshore to Seashore

In May 2014, the VAF will be coming to “Down Jersey”, the southern part of New Jersey that includes some of the Pine Barrens, the shoreline along the Delaware Bay, and the southern Atlantic beaches. The conference is being co-sponsored by the Richard Stockton College of New Jersey, and will be headquartered at the beautiful Seaview Conference Center in Galloway Township, NJ.

The coastal landscape of New Jersey will be the setting for tours of Pine Barrens’ (or Pinelands) historic industrial and recreational development, and small fishing and boat-building towns along the Delaware Bay. The stories of different people who settled the area can be told through surviving buildings and landscapes, and the conference tours will highlight the presence in Down Jersey of New England shipbuilders and Quaker farmers in the 18th  century; the African Americans who established their own free communities in the mid-19th century; the European Jewish immigrants who were relocated here to escape late-19th century pogroms; and the Italian immigrants who brought commercial agriculture into the 20th century, helping to make New Jersey “The Garden State”.

Registration for the conference will open in February 2014.  The conference will run from May 7 though May 11, 2014, and will include an opening reception on the evening of May 7 at Stockton College with keynote speaker Bernie Herman.  Two days of tours on May 8 and 9 will offer four different tours – two on each day. The rich variety of vernacular buildings and landscapes in the region means that no conference participant will be able to experienceeverything.   Paper presentations on Saturday, May 10 will be followed by an evening gala at Seaview.

There will be an opportunity for a post-conference tour to the Victorian resort town of Cape May, and to Wildwood, New Jersey, known for its collection of mid-20th century motels and “Doo-Wop” architecture.

The organizers of the Vernacular Architecture Forum in New Jersey in 2014 look forward to seeing you at this wonderful event.  The NJ VAF 2014 coincides with the celebration of New Jersey’s 350th anniversary, and we will have buildings on tour that date from each century of the state’s existence.

“Salem County: Patterned Brick and Beyond”

The journey to the Delaware Valley region of southern New Jersey begins with, but goes beyond, the long-celebrated patterned brick mansions of the 18th century. Other kinds of buildings—domestic, agricultural, public, and religious—also took root in this part of Fenwick’s Colony and  reveal a cultural landscape within Salem County linked together by themes of settlement, religion, agriculture, and emancipation.  In Elsinboro Township, Mason Point presents a frame 18th century dwelling and the tidal landscape European settlers engineered for agriculture through meadow banking.  The tour will trek down a half-mile unpaved and possibly wet lane to the Abel and Mary Nicholson House, a National Historic Landmark that exemplifies Quaker-associated patterned brick architecture. Lunchtime will be spent in the City of Salem, the hub of civic, commercial, and religious activity in the county from the time of John Fenwick’s founding. A self-guided walking tour of fifteen public buildings, museums and townhouses will illustrate a variety of architectural forms and styles. Lunch will begin at the Salem Friends Meetinghouse, and end with dessert at a former farmer’s exchange/feed mill.  Just beyond the town, the elite Wyatt and Wistar farmsteads, linked by kinship and meadow farming will feature Quaker-built dwellings in frame and brick along with their barns and other outbuildings, from the Revolutionary period to the Early Republic. In Mannington Township, the fragmentary settlement of Marshalltown illustrates African American agency and autonomy through the 19th and early 20th centuries. The day concludes in Aldine, a crossroads village in the interior township of Alloway, where John and Rachel Watson's farmstead will provide a contrast in architectural form and taste.  Aldine United Methodist Church will serve us their traditional “Duck Supper” across the road.

The village of Greenwich (pronounced GREEN-wich) is a Delaware Bay community whose history extends to 1684, when it was the first port in New Jersey.  It retains a remarkable collection of 18th century buildings, and many will be open for the tour, including several historic houses, the Friends Meetinghouse, and the Old Stone Tavern. After a stop at “Old Stone”, a well-preserved Presbyterian Church in Fairton, the tour goes on to the historic village of Mauricetown. It was a center of shipping and ship-building in the region; the Romantic Revival flourishes on many of its houses (several open for the tour) point to the mid-19th century flourishing of the community. Lunch will be served in Mauricetown at the local firehouse with the assistance of the Historical Society.   In the afternoon, the tour heads to Burcham Farm – the state’s only remaining meadow-banked farm -  and the East Point Lighthouse in Delaware Bay. The day concludes in the community of Bivalve, once a center of the New Jersey oyster industry, and a dinner will be served at the shipping sheds.  New Jersey’s official Tall Ship, the oyster schooner the A.J. Meerwald is docked at Bivalve and on display.

“Four Centuries by the Shore in a Day”

Never more than five miles from the Atlantic Coast, this tour will reveal an entirely different “Jersey Shore” than the close-packed houses, resort businesses, and boardwalk of popular imagination. The Doughty House and its associated farmstead represent the agricultural development of this coastal region before it was transformed to a resort area. Real estate speculators tried all kinds of things to attract visitors to the area in the 19th century, including construction of Lucy, the Margate Elephant. This heavy-timber-framed wooden elephant is now a National Historic Landmark, and “she” will be opened for exterior and interior viewing. There will be stops at Woodbine Synagogue (1896), the largest of the late 19th century synagogues built in the newly settled “Jewish villages” of southern New Jersey; South Seaville Camp Meeting, a Methodist camp enclave dating to the 1860s, where lunch will be served; and Seaville Friends Meetinghouse, a one-story, plank frame structure erected in 1727.  The tour continues to two privately-owned timber-framed houses in the New England tradition, one built ca. 1695, and the other ca. 1708.  “Rufwud,” a Craftsman-style shore cottage designed in 1917 by noted Philadelphia architect Oscar Mons Hokanson, contains many original details and furnishings.  The final stop is Historic Cold Spring Village, which includes historic structures preserved in the 20th century by their relocation from several South Jersey locations. Dinner will be served at the restored Grange Hall within the Village.

The Pinelands Tour begins at Batsto, an 18th and 19th century plantation centered at an early “bog-iron” and glass manufacturing center. The iconic Wharton Mansion, a sawmill, worker’s housing, the store/ post office and mule barn will all be open.  Tomasello’s Winery in Hammonton offers a local-themed lunch, wine tastings, and the story of vinticulture in the uplands of South Jersey, presented by the head of the Outer Coastal Plan Vineyard Association.  The tour continues to Atsion, another center of bog-iron production, where a notable Greek Revival style house will be opened for inspection. Pinelands lowland agriculture will be showcased by a stop at a traditional cranberry farm, The Birches, conserved in the heart of the Pinelands. The tour will finish t Medford Lakes, a town incorporating 22 lakes and a collection of log cabins built as vacation homes in the late 1920s and 1930s. Many will be open for visitors, as will the log church and community house.  Dinner will be held nearby at the Medford Village Club.

Many of the sites being visited are small, old, and fragile, and in the interests of allowing everyone to see as much as possible while minimizing wear and tear on the buildings, tours will be limited to two bus loads (110 people each).  In the event of more than 220 registrants, an additional tour will be opened each day; one to Cape May and one to various sites in the Pine Barrens. These tours will visit sites within the scope of the overall conference, but  not all individual sites on these tours will be covered in the guidebook.

This day of paper presentations on vernacular architecture is included in the conference base registration.  It is open to those who wish to attend without registering for the other parts of the conference.  There is no charge to employees of the State of New Jersey or of county and municipal governments in NJ; those who wish to attend only the papers session and not the entire conference and are not employees of the State, County, or Local governments are charged $ 25.  You may order a box lunch for an additional $25, to be served mid-day. There are full-service restaurants in the hotel if you prefer, or you may bring your own lunch.

If you have never been to the “Jersey Shore” you must take this opportunity to see two iconic communities there.  Buses take guests to the City of Cape May, “America’s oldest seashore resort” and home of the largest concentration of Victorian-era architecture in the state.  Cape May revived its tourist economy by highlighting and preserving its historic buildings while other towns along the shore rushed to tear down the old and build new. In the afternoon, the bus will head to Wildwood, a shore resort that was developed after World War II, and has worked in recent years to preserve and promote the “Doo-Wop” architecture of the town.

Tour is expected to leave Seaview at 9 am and return by 5 pm.

Registration is $ 125; meals are not included in the price but there are opportunities to purchase lunch in Cape May at a variety of price points.

Flashlight – if interior details are of interest to you

Water bottle(s) – we will not be providing these

Tote bag or backpack for all this stuff, plus the guidebook you will receive at the conference

Lightweight jacket / rain gear and comfortable clothing in layers:  May temperatures in Southern New Jersey average from lows of 39-46 F to highs of 58-67.

We expect perfect weather, but tours will carry on rain or shine, so be prepared!

For immediate questions or to offer support for this event, contact NJVAF2014@gmail.com

Please read the information about conference tours and events below before you enter the registration site. When you are ready to register, please click HERE.